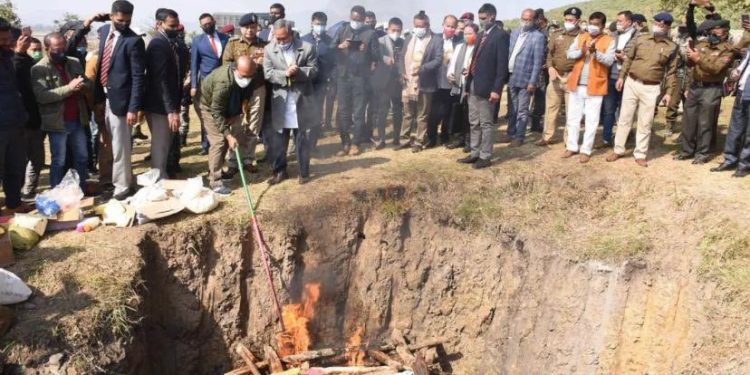 Manipur chief minister N Biren Singh on Saturday said that the drugs worth thousands of crores of rupees were  seized during various operations conducted under the ‘War on Drugs’ campaign.

The police and security forces have also managed to arrest several drug peddlers from different parts of Manipur, many of who were also involved in cross-border smuggling of drugs.

The chief minister said this while participating in a function organized on the occasion of the ‘International Day Against Drug Abuse and Illicit Trafficking’ in Imphal on Saturday.

He asked all the citizens to stand firms against drug abuse and illicit trafficking.

“We have been able to seize a huge quantity of narcotic substances amounting to thousands of crores of rupees from different parts of the state. Security forces and the police have also arrested several drug peddlers,” said Singh.

The chief minister also put some narcotic substances on fire, symbolizing the intolerance for all such substances.

Manipur happens to be one of the states with the highest incidence of drug abuse in India.

In fact many organizations, NGOs and residents of several villages have joined hands with the Manipur government in the war against drugs.

Village residents had also destroyed several acres of illegal poppy plantations in and around their respective villages.

On this International Day Against Drug Abuse and Illicit Trafficking, let us stand firm on our zero-tolerance policy on drug abuse and illicit trafficking.

Under ‘War on Drugs’ campaign, we have apprehended numerous drug traffickers along with drugs worth thousands of Crores. pic.twitter.com/DBO8RFHvGn