The country’s first gold medal came in astounding fashion on the opening day of the 2018 Commonwealth Games from world champion and CWG record holder Saikhom Mirabai Chanu, who broke six records in six lifts to finish first in the women’s 48 kg.

She in total lifted 196 kg to smash her previous career best of 194 kg.

Earlier, she had won silver medal in the women’s 48 kg weight class at the 2014 CWG at Glasgow. The gold medal at Glasgow was won by another weightlifter hailing from Manipur, Khumukcham Sanjita.

The Manipuri weightlifter had lifted 86 kg in snatch. 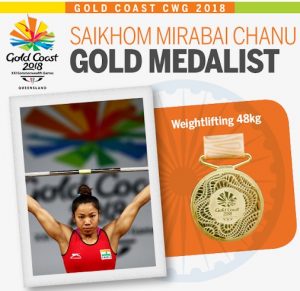 She also created a new Commonwealth Games record in the process.

Covid-19 vaccination: 45,000 health workers to be immunized in Tripura