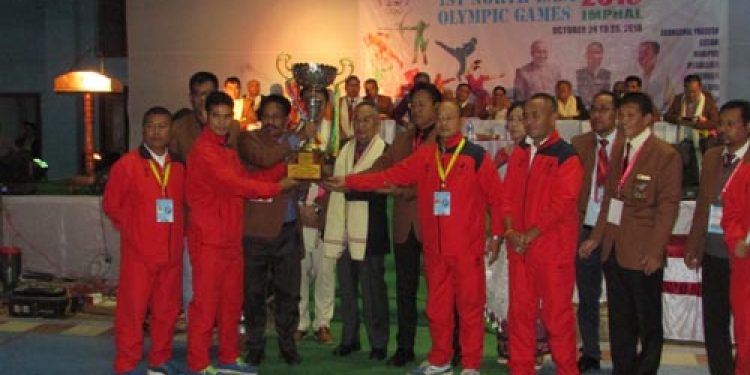 Manipur emerged over all team champion among other northeastern states in the five-days of the first North East Olympic Games, 2018 which concluded.

Despite a light drizzle which forced the closing ceremony to shift from the main stadium to indoor stadium at the Khuman Lampak sports complex last evening.

The second edition of the North East Olympic Games will be held in Arunachal Pradesh in 2019.

Interestingly Tripura did not win gold medals in the games where nearly 2000 athletes and officials from 8 NE states including Sikkim participated and competed in 12 different sporting disciplines-archery,athletics,badminton,boxing,football,judo,karate,shooting,table tennis, taekwondo, weightlifting and wushu.

Speaking at the function, Deputy Chief Minister Joykumar said holding such event in Imphal will definitely help build up friendship and maintain cordial relationship among the north eastern states.

He also appealed to the coaches and managers in the region to train the young players in the suitable sporting disciplines so that they can compete and bring laurels.

In his speech Minister Radheshyam Singh who is Chairman of the Organizing Committee of 1st North East Olympic Games, 2018 and President of Manipur Olympic Association said, the Games is a historic event in the sport history of the region.