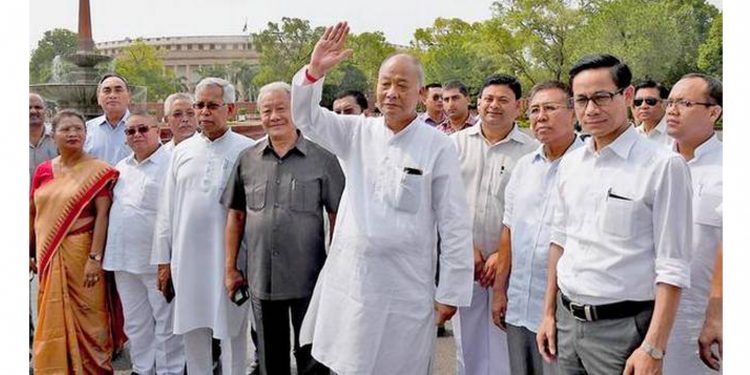 Former Manipur Chief Minister Okram Ibobi Singh along with 14- other Congress MLAs from the state on Friday staged a sit-in protest at Jantar Mantar in New Delhi.

The protest was staged after he was denied an appointment with Prime Minister Narendra Modi and home minister Amit Shah.

The Congress delegation from Manipur has been campaigning in New Delhi against the Citizenship Amendment Bill (CAB).

The delegation was also demanding disclosure of the contents of the Naga peace accord between Government of India and NSCN (IM).

“We wanted to meet the PM and home minister to convey our concerns over CAB and Naga peace accord. It’s heartening that we have sought time from them but we were not given time for a few minutes,” said Ibobi Singh.

The Congress delegation from Manipur has been opposing Centre’s move to introduce and subsequent passage of CAB in the Parliament.

Meanwhile, the Congress delegation submitted a memorandum in the Prime Minister Office (PMO) in support of their demands.

In their memorandum, the Congress leaders said that CAB would cause a catastrophic impact on demography, language socio-economic and political structure of the country in general and that of the indigenous people of northeast India (especially Manipur) in particular.

“The Congress Legislature Party (CLP) once again reaffirms its stand to appeal the union government not to re-introduce the bill again,” the delegation said in its memorandum.

Referring to the Naga peace accord, it further said that Congress Legislature Party is against the reported formation of Autonomous Territorial Council in Manipur.

“CLP is against any such move as it will automatically lead to a formation of a new territory or state ‘hence division of the state of Manipur,” it added.