The ongoing works in Manipur, the progress in not very very good. I like people who can get the things done: Nitin Gadkari 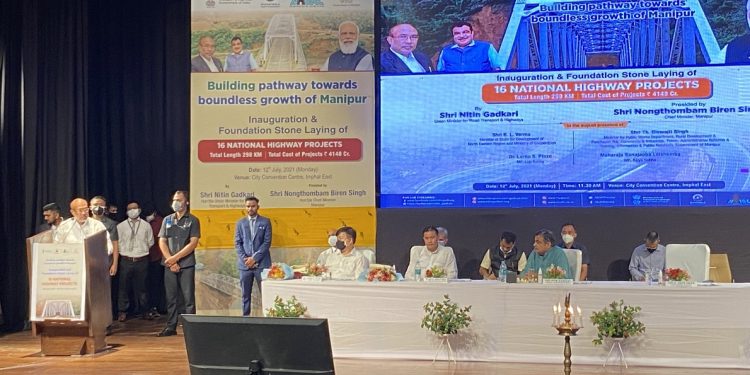 Union Road Transport and Highways minister Nitin Gadkari has expressed dissatisfaction over the progress of developmental projects in Manipur.

Nitin Gadkari pulled up Manipur chief minister Biren Singh over slow progress of projects in the state while speaking at an inauguration ceremony.

Union Road Transport and Highways minister Nitin Gadkari, on Monday, was in Imphal where he inaugurated as many as 16 National Highway projects for the State.

These 16 National Highway projects would be of 298 kilometres in length and would be completed at an estimated cost of Rs 4148.

The 16 National Highway projects include the all-important Makru Bridge, which lies along the Imphal-Jiribam road.

“Completion of Makru Bridge will ensure hinder-less movement of goods and services, to and from the state. Makru Bridge will be operational from second week of July,” Manipur CM N Biren Singh said during the inauguration ceremony in Imphal.