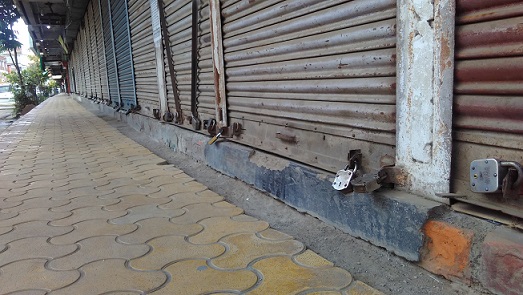 A view of the bandh in Imphal. File image: Northeast Now

The general strike which started from the midnight of July 31 was called in protest against the Centre’s alleged attempt to enforce Article 371 A of the Constitution in Manipur.

AMUCO, UCM and CCSK had already staged a sit-in demonstration in connection with the issue in Imphal on July 28, 2018.

The strike was effective in the greater Imphal area and the valley districts as the strike supporters, comprising mostly women, came out in groups to enforce the bandh. Many other bodies also supported the general strike.

Almost all the roads leading to the State capital wore a deserted look from dawn-to-dusk after the inter-State, inter-district and inter-town transport services originated from Imphal and others locations were suspended for the day in view of the strike.

Most of the Government and private offices, besides educational institutions, markets, shops and business establishments in and around Imphal, remained closed for the day.

However, the general strike did not affect the normal functioning of the Imphal International Airport. The State Government has deployed necessary armed and unarmed security personnel both male and female at many strategic locations in and around the State capital during the course of the strike to avoid any unwanted incidents.

No unwanted incident was reported during the course of the strike till the report goes to the press.