Delimitation issue turns into bone of contention in Manipur 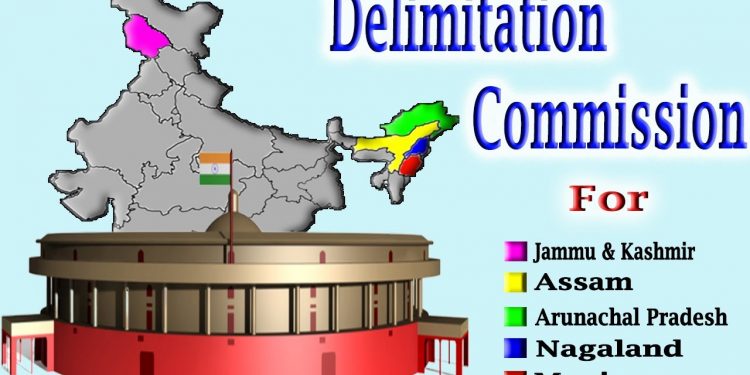 Ever since the Government of India announced Delimitation Commission 2020 to carry out its exercise in the Union Territory of Jammu & Kashmir and four states of the Northeast, there have been heightened activities in Manipur.

Voices for and against having the exercise carried out – both from political circles as well as civil societies have become shriller, giving their perspectives why or why shouldn’t the delimitation process must go ahead as envisaged.

The Indian National Congress (INC), which sees no virtue in anything that its arch rival BJP does is all in arms, fist up and questioning the wisdom of the ruling party for having to hurry up the exercise when the next delimitation is due in 2026 which is not too far away.

The shrewd politician that he is, Ibobi is also trying to throw the ball into the BJP’s courtyard saying, “the government should not turn a blind eye to the inevitable fallout” and expresses his surprise that the BJP-led coalition government in Manipur was silent on the issue.

This statement by the top Congressman in the State doesn’t seem to be mere political gimmick.

It appears to be one with certain degree of subtlety.

Though he did not say so in that many words, the meaning of ‘inevitable fallout’ seems to suggest that the valley districts would be grossly deprived in terms of number of seats if the Assembly constituencies were to be re-drawn on the basis of 2001 Census.

Therefore, the question that comes to mind immediately is, can this statement be taken as the considered view of all Congressmen in the state?

It will be known the stand of Congress leaders from the hills. Also in what may be seen as an attempt to thwart the process at all cost, some senior leaders within the Congress have even cited disturbed law and order situation as basis for calling off the exercise in Manipur, though in all fairness one must say that the security situation in the state is a lot better now as compared to what it was in 2002 when the last Delimitation exercise was deferred.

For politicians, the writings on the wall therefore, appear to be pretty clear.

Besides this political brinkmanship, the debate on whether or not delimitation process must move forward is also revolving around perceived factual error in the enumeration and tabulation of the 2001 census involving nine Hill Sub-Divisions where the decadal growths in population were found to be unusually high.

They are Mao-Maram, Paomata, Purul, Saitu, Chakpikarong, Machi, Moreh, Chandel and KasomKhullen in the erstwhile undivided districts of Senapati, Chandel and Ukhrul. More than the political contestation, this particular issue has already generated great deal of debate and has the potential to once again polarize the general public on the lines of hill and valley – Meiteis versus Tribals.

There are two divergent views as of now.

Describing the unusually high growth in population in some hill districts as an unacceptable error, valley intellectuals are already seeing it as a discrepancy which has the potential to drastically reduce the valley peoples’ entitlement in terms of seat distribution if the Assembly constituencies are re-drawn on the basis of the 2001 Census.

This view is also precisely what the Congress strongmanIbobi, meant by the “inevitable fallout”.

On the other hand, Tribal bodies such as the Manipur Tribals’ Forum for Delimitation (MTFD), the KukiInpi, Manipur (KIM), and many other tribal organizations contest this claim with the argument that Census 2001 was conducted by the office of the Registrar General & Census Commissioner of India in a manner population enumeration processes were carried out elsewhere in the country.

Therefore, before finalizing the data and making it public, the good offices of the RG&CC of India, would have sufficiently scrutinized for necessary corrections and omissions.

They content that since the Supreme Court of India had dismissed 3 Special Leave Petitions and 3 Writ Petitions challenging the accuracy of census 2001, the 9 Sub-Divisions issue needed no further discussion.

Hence, for now delimitation has unnecessarily popped up as borne of contention between the hill and the valley.

A brief look at contentious issue of Census 2001 – Manipur recorded a population growth of 24.86 per cent, which is a shade above the national average of 21.54 per cent.

The overall growth percentage for the valley districts stood at 19.03 per cent, while the hill districts recorded a decadal growth of 35.47 per cent, which no doubt is a substantial difference.

However, in terms of real time populations count, the hill is much sparely inhabited, therefore the increase in numbers was bound to indicate sharply when converted into percentage.

One other factor which needs to be taken into account is the awareness level.

As opposed to the valley districts where small family norms are strictly followed by choice, the tribal population’s level of understanding on the benefit of small families is still way below par.

Also between 1992 – 1997, the hills of Manipur experienced the most unfortunate phase in tribal history of the state where the Nagas and Kukis were embroiled in a bloody ethnic clash that led to massive inter-district migrations.

This being the reason, calculation of district-wise distribution of average population per assembly Constituency based on population figures of 2001 census remained unchanged in Churachandpur and Tamenglong districts.

While Tamenglong saw substantial migration of Kukis to other districts, particularly to the undivided district of Senapati, there was no significant migration from Churachandpur.

It must be mentioned that both the valley Meiteis and Tribals of the hill district nurse certain political grouse which are reasonable.

Among many others, one main grouse of the valley public is seven Assembly segments in Thoubal district made part of the outer Manipur Parliamentary Constituency, which is an ST seat. It deprives willing candidates from this segment from contesting the Parliamentary elections.

That every ruling party made use of this arrangement to garner two seats in their kitty in every general election is a different story. Likewise, in the hills districts the geographical areas covered by Assembly Constituencies are very large in comparison to what it is in the valley.

People therefore argue that while in the valley a MLA could cover in the entire constituency in a day, it takes days to do so in the hills.

They also argue that while development works in valley constituencies mostly surfaced in the form of improving existing infrastructure, most hill districts have to begin from the scratch, which required much more resources even though development funds allocated to every MLA remains the same. In the present dispensation, the valley which occupies 10 per cent of the geographical area has 40 assembly seats in a house of 60 members, while the hill which occupies 90 per cent of the total land mass has 19 seats.

Reason why the valley Meiteis vehemently oppose delimitation exercise being carried out on the basis of 2001 Census is for fear of losing some seats to the hill districts.

Holistic, concerted and consensus approach would be necessary to remove the mismatch.

But for now, the government of India must delicately deal the delimitation process on merit and not go by who pulls the string harder – after all it has been long enough wait for all stakeholders, and also future communal equation hinges on how the issue is handled.

The author is a retired IPS Officer. He can be reached at [email protected] Views expressed are personal