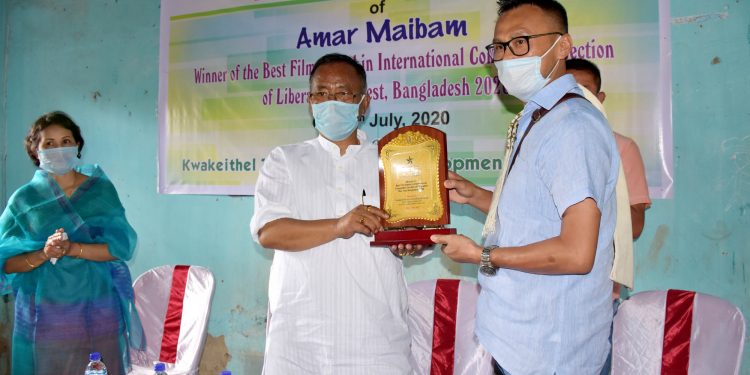 Manipur art & culture minister Langpoklapam Jayentakumar who is the local MLA of Keishamthong Assembly constituency in Imphal West district, corporator P Premila Devi of Ward No 12, Imphal Municipal Council and other local leaders were present during the event.

Speaking at the felicitation occasion minister Jayantakumar said that winning such award at the very early age by Amar Maibam is indeed a landmark in the history of Manipuri Cinema.

The film ‘Highway of Life’ depicts the hardships faced by drivers and handymen during their journey on the national highways of the State.

He said it is just the beginning of Amar’s career in films.

There is a long way he has to cover in his film career.

The remaining part of Amar’s film career will be filled with lot of success if he continues working in this line with strong determination and dedication, the minister added.

Amar Maibam’s 52-minute long film – Highways of Life, won the Best Film in the International Competition of the 8th Liberation DocFest Bangladesh-2020 held from 16 to 20 June in Dhaka.

It may be mentioned that the results of Class 12 examination of COHSEM was declared in Imphal on Friday.

Six months’ honorarium of the agents of the Keishamthong Assembly Constituency was also distributed to the agents by the minister as a part of the occasion.