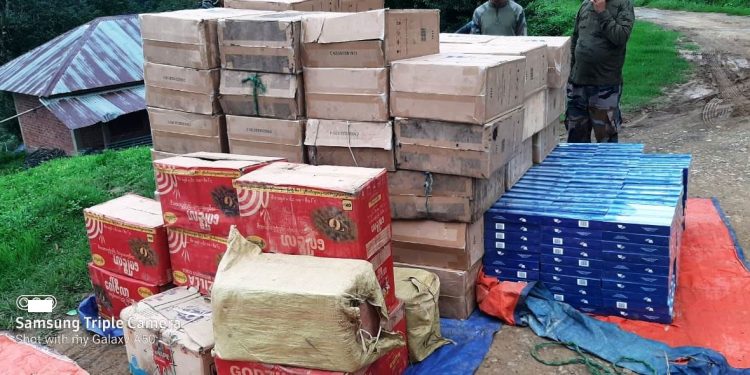 This was stated in an Assam Rifles press release issued on Saturday.

37000 packets of imported cigarettes and 920 packets of Godzilla coil worth lakhs were recovered from the vehicles without any valid documents or permit, it added.

The contraband items along with the vehicles and the apprehended individuals have been handed over to Machi Police Station.

In another development, troops of Assam Rifles recovered imported cigarettes from two different incidences on Saturday.

Based on specific input pertaining to smuggling of contraband items in Gen Area Moltuk, the team noticed cardboard boxes of WIN Cigarettes hidden inside the vegetation, the release further added.

After carrying out a thorough check of the area, 16000 packets of WIN cigarettes worth lakhs of rupees were recovered.

In another incident, Assam Rifles troops intercepted a vehicle in general area Machi, the smugglers fled on seeing Assam rifles.

On thorough checking of the vehicle, 2500 packets of WIN cigarettes worth lakhs were recovered. Items have been handed over to Chandel and Machi Police Stations respectively.