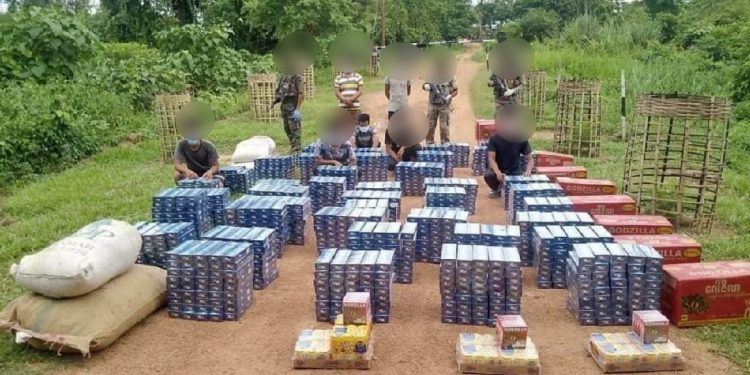 As part its ongoing activities in Manipur, troops of Assam Rifles recovered contraband items worth lakhs of rupees in two seizure operations on Thursday.

This was stated in a press release issued on Friday.

The Assam Rifles moved to Gamphazol village on receipt of information regarding smuggling of Contraband items in the village.

During routine check, a Maruti Gypsy was stopped and on carrying out a detailed check, 5500 packets of WIN cigarettes, dry supari nuts and other contraband items were recovered at Gamphazol,the release of the Assam Rifles (South) said.

WIN cigarettes are from Myanmar.

A total of three apprehendees have been identified as Thongmang from Old Samtal, Tong Min Thang from Hengshi and Hai Milien from S Bongjoi,it said.

In another joint operation with Molcham Police,  6000 packets of WIN cigarettes were recovered.

During routine check, four bikes were stopped and on detailed checking, 6000 packets of WIN cigarettes worth lakhs of rupees were seized.

Accordingly, a case has been registered in this regard at NAB PS for further investigation.