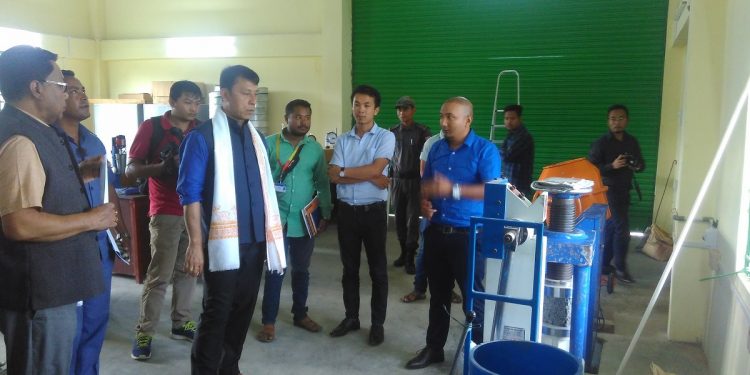 A team of students from newly established Manipur Technical University (MTU) bagged first prize and best disciplined team award in the first ever North East Hackathon 2019 in the region recently.

The team comprising five students who are undergoing different semester were felicitated at the premises of the MTU located at Takyelpat near Imphal on Thursday.

The team received a cash prize of Rs 1,50,000 during the competition which was organized by Assam Science and Technology University (ATSU) at Maniram Trade Centre in Guwahati on September 3 and 4 last.

The developed model addresses the problem of food wastage due to lack of cold storage. It also solves the issue of contamination of food which occurs in conventional sun drying process.

The idea of using energy, recycle and novel heat energy utilization are some of the highlights of the model.

The competition which aims to develop problem solving abilities of students in different sectors of industry and also to identify the best talents was held under Technical Education Quality Improvement Programme of Ministry of Human Resources Development.

It was participated by 93 team from various eminent institutions such as IIT Guwahati and NIT Arunachal Pradesh, Jorhat Institute of Science and Technology etc.

IIT Guwahati and Girijananda Chowdhury Institute of Management and Technology Guwahati secured the second and third position titles in the competition.

The competition was held under five different sectors such as textile and handloom, tourism, water management, energy, environment and sustainability and food technology.

Lauding the winning team, Manipur education minister Th Radheshyam attending the felicitation function informed the gathering that the department has proposed to establish a science instrumentation centre in the State.

On the other hand commissioner Kh Raghumani of Higher Education expressed the need to organize regular students exchange programs in the university.

Vice chancellor Prof L Tombi of MTU which was established on April 23, 2016 was also present during the function.