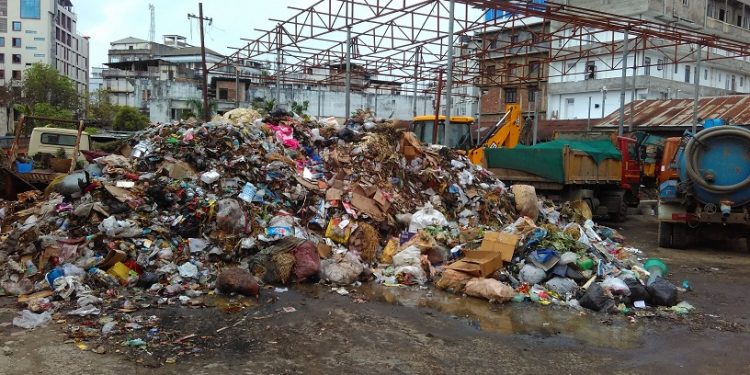 Reports said the locals of the Lamdeng area under Imphal West district have prevented movement of the vehicles carrying the solid waste and their disposals at the waste management plant at Lamdeng khunou in the outskirt of Imphal.

Locals protesting the concerned authority’s failure to fulfill the long standing demand of construction of road, fencing and drains around the state’s lone solid waste management plant at Lamdeng under Lamshang Assembly constituency.

Even though due process has been initiated to translate the local people’s demands into action, necessary work order could not be issued as the election model code of conduct is still in force, IMC sources said.

In view of the development, the door to door collection of the municipal solid waste and other waste materials by IMC and 14 other non-governmental organizations affiliated to IMC has been stopped since the past 4/5 days forcing the residents to pile up the waste at their gates.

A senior official of the IMC said that they’re trying their best to resolve the issue at the earliest.

The official also informed that the Imphal town generates more than 100 metric tonnes of solid waste on daily basis and the vehicles of the affiliated NGOs and IMC have been transporting them using more than 50 truck loads to the Lamdeng plant for further processing.

The plant which was established few years ago to safely dispose off municipal solid waste has the capacity to convert the organic waste into compost on daily basis.

Interestingly around 65 percent of the municipal waste generated in Imphal area is of plastic waste apart other forms of waste including electronic waste which needs segregation for proper disposal.

However, the IMC authority here is yet to initiate the process of segregation of the municipal waste at source unlike other areas in the country not to speak of officially registering the rag-pickers, e-rickshaws and other related stakeholders to generate additional income.

Presently the IMC is generating its income only from the fees collected from toll tax, parking, vendor, stall and others. Apart from IMC, there are 28 urban local bodies across the State.