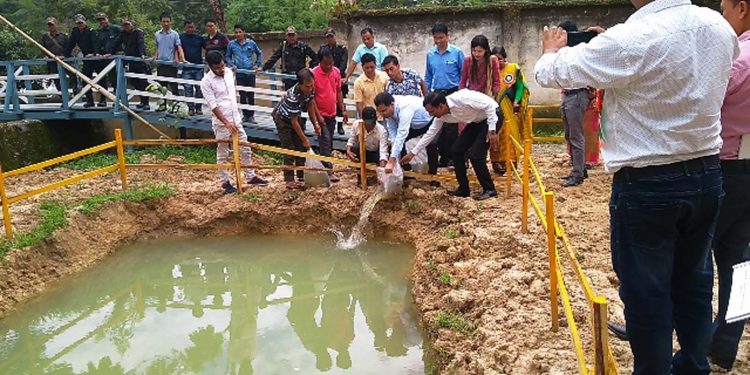 In order to meet the State’s fish requirement, the Fisheries department of Manipur with the help of Indian Council of Agricultural Research and other related departments have formulated certain measures.

As part of these measures, training programmes are being conducted by the Fisheries department of the State.

The programme has been conducted at the District Rural Development Authority hall of the DC complex at Chandel.

He said the gap is being filled up by purchasing from other parts of the country and this way a large amount of money is going out of the State.

Regarding loan facilities, he informed that the department is facilitating loan for the interested farmers though different banks.

The top official further added that Rural Development programmes like MGNREGA can be incorporated with this programme.

In his speech, Chandel deputy commissioner Krishna Kumar said it is a part of the Mission Self-sufficient 2020.

He further said people of the district should join hands and make it a mass movement.

Giving her presidential speech, director Bidyarani Ayekpam of Fisheries department said the programme is being taken up for farmers with an objective of doubling their income.

She added the government is always ready to support and providing an assistance of 40 pc subsidies for making new fish pond.

The training is being conducted as part of the capacity building, said Ayekpam.

She asked all the farmers present to take advantage of the presence of all the expert trainers and learn as much as possible.

Tuesday’s training programme was organised by the District Fishery Office, Chandel under the aegis of National Fishery Development Board.