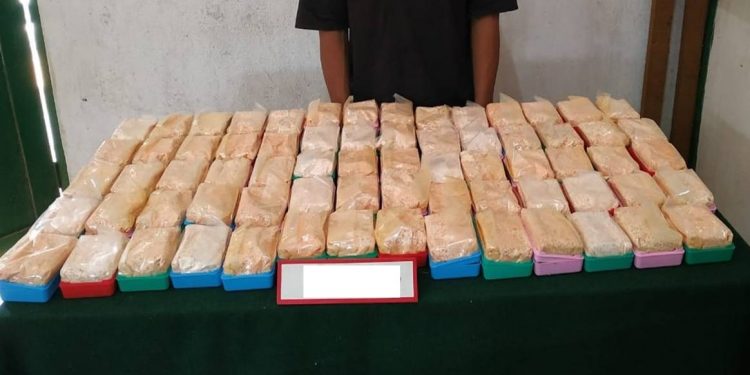 In continuation to its remarkable run of seizures, Tengnoupal Battalion Assam Rifles of 26 Sector Assam Rifles on Tuesday apprehended an alleged drug smuggler carrying brown sugar worth Rs 1,87,20,000 at Khudengthabi check post located along Imphal-Moreh highway in Manipur, according to a press release.

At around 12 noon on Tuesday, based on specific input received from reliable source, a joint team of troops of Khudengthabi Post Assam Rifles and commando team Moreh stopped a silver coloured Maruti Alto (MN 02G 3132) travelling from Moreh to Imphal for checking, said Assam Rifles PRO (South) in a press release issued later in the day.

While carrying out a thorough checking of vehicle, orange coloured powder suspected to be brown sugar (70 packets) was found hidden inside the body of the vehicle.

The contraband items were being allegedly smuggled by one Haopu Haokip (33), son of Khellet Haokip and a resident of Phaicham Veng at Binda Part-III in Moreh of Tengnoupal district. The individual along with the contraband was handed over to Moreh police station, the release stated.

In one of the biggest recoveries of contraband drugs so far this year, Assam Rifles had seized a huge quantity of ‘World is Yours’ tablets worth approximately Rs 14.58 crore in Manipur’s Tengnoupal district bordering Myanmar on February 19 last.