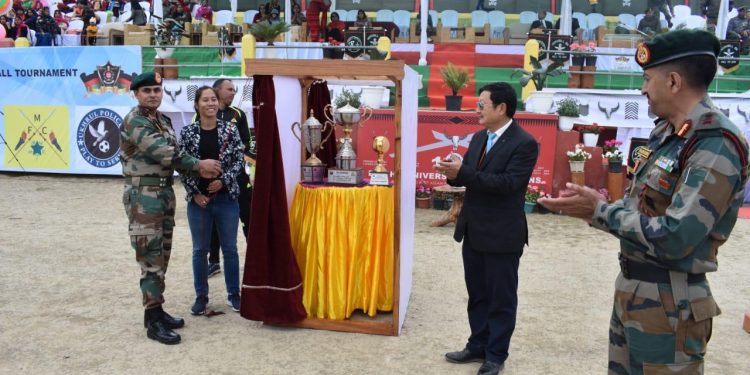 The grand opening ceremony of the football tournament which comprised of a multicultural extravaganza showcasing the rich culture and heritage of Manipur especially the Tangkhul Naga tribe, is being organized by Somsai Battalion of 10 Sect Assam Rifles.

Speaking on the occasion, the TNL president Hopingson paid his respects to Major Bob Khathing and appreciated the efforts of the Assam Rifles in keeping alive the memory of the great Tangkhul personality.

A total of 22 matches will be played in football and nine matches in volleyball competitions. Choir competition will take place on February 21.

Earlier, the Bob Kathing Baby league football championship to encourage the future stars was held on February 14 and 15 at Ukhrul. The event was won by Ukhrul Football Club.

To remember the Tangkhul Legend Major Bob Khathing, a stalwart of the Northeast, who founded the village guard force in the region and Nagaland Armed Police in the 1950s, the event comprising of men’s football, women volleyball, baby league football and church choir competitions will be held till February 23.

A wreath laying ceremony will also be held on February 28 at the Mantripukhri residence of the Tangkhul Legend.

Major Bob Khathing had served as the minister in charge of Hills Administration in Manipur, political officer of the then NEFA (North East Frontier Agency) in Arunachal Pradesh, chief secretary of Nagaland and Indian Ambassador to Myanmar.