Live performance of robots, made and assembled entirely in India at Shrimanta Shankar Academy on June 26, 2018. Northeast Now

Students of Shrimanta Shankar Academy, Guwahati became the first lot of students from the North East to witness a live performance of robots, made and assembled entirely in India on Tuesday.

About 1,000 students along with their teachers got a first-hand demonstration of robotics as a school teaching aid at an event, organised by Bangaluru based Sirenna Technologies.

According to Ashwani Kumar of Sirenna Technologies, “Students go to schools, then to engineering institutes and eventually go to work in technology companies. That’s good, except that it’s a linear system and there’s absolutely no feedback going into the schools back from the technology industry. This is simply because there’s nobody taking that knowledge back to the schools.” 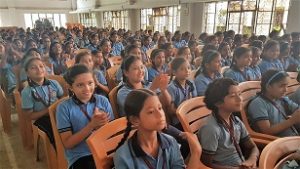 According to the trainers humanoid robots can not only make classrooms more interesting but also make room for intensive and advanced learning. Comparing the robots with the computer, the trainers explained that while the computer cannot think or move, the robot can. Moreover, the robot is equipped with artificial intelligence and hence it is both smart and sensitive.

Both Nino 1 & Nino 2 danced together to the music of Bollywood potboilers and the kids loved it. The robots also demonstrated classroom sessions in which they took classes in nursery rhymes, science, and environment.