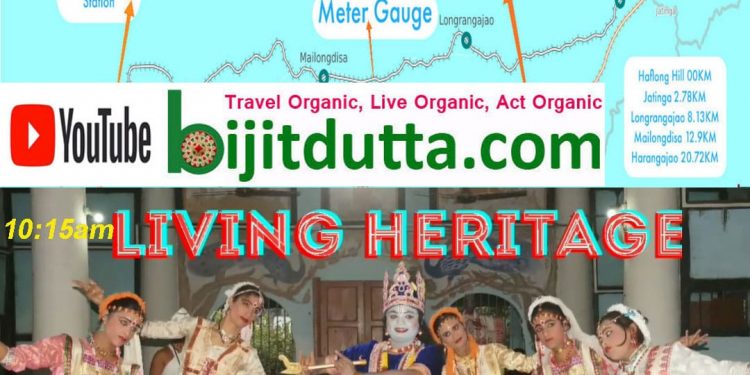 Come World Tourism Day on September 27 and travel blogger Bijit Dutta of Jorhat will premier two short YouTube films – one on adventure and the other on culture – with an eye on their tourism potential for Assam.

For those  who seek an adrenaline high Bijit will pitch for the preservation of the British era now defunct metre gauge railway track at Haflong to Harangajaw and its promotion as a heritage trail, by the Assam Tourism department.

In the two minute long clip, Bijit shows the route which the 21 kms track takes, hugging mountains and passing through tunnels.

“The British who began building the railway track in the 1890’s took 16 years to complete it. It was hard work as it passed through very difficult terrain, cutting through rugged mountains, passing through 14 tunnels and over 10 bridges,” he said.

He further said that though a few of the bridges were dilapidated and risky, ‘what is adventure without a bit of risk’.

Through the film, he has asked the Assam Tourism department not to dismantle the track and make it a heritage trail through the mountains of Haflong.

In the other short film of the same length, Bijit has shown the Sattriya dance performed by the bhakats (monks) residing at the Uttar Kamalabari Satra of Majuli.

Along with the Haflong trail, Bijit has also advocated that the Sattriya culture as showcased in the Uttar Kamalabari Sattra of Majuli be part of the tourism circuit of the largest inhabited river Island.

Stating that the Sattriya culture and tradition formed a part of the Bhakti movement, Bijit said that it continues as a living heritage till today.

“Introduced by religious and social reformer Srimanta Sankardev in the 15th century, the dance and the music depicts the divinity of Lord Krishna and various episodes of his life and forms a part of the Vaishnavaite culture and tradition, ” he said.

The clip shows young boys learning the steps and rigorous contortions of the body while enacting the dance which is now one of India’s classical dances.

The two presentations will be premiered from 10 am on YouTube on September 27 in his channel,  bijitdutta. com.