Assam’s Congress MP Bhubaneswar Kalita resigned from Rajya Sabha and the party with a new dream to join the BJP.

Kalita is all set to be re-nominated by the BJP to the Rajya Sabha, sources said.

Sixty-eight year old Kalita on Monday resigned amidst the unruly scenes witnessed in the Upper House on Monday over the Kashmir issue.

Interestingly, Kalita said he resigned from Rajya Sabha and the Congress because the present scenario in the party is worrisome.

“My conscience does not allow me to be a part of such negative developments and still continue in the Congress party,” he said.

I have resigned from the Rajya Sabha membership today. #Assam

The news of Kalita’s resignation came as a bolt from the blue for the senior leaders of Assam Pradesh Congress Committee in Guwahati.

The Congress leaders had no prior information that Kalita was going to resign.

According to political analysts, Kalita resigned from the Rajya Sabha and the Congress because of two reasons.

Firstly, Kalita was not happy with the party high-command for not paying heed to his request to be the president of the Assam Pradesh Congress Committee.

Secondly, if he joins the BJP, and gets another term in Rajya Sabha, he would continue to be in circulation in the political circles in New Delhi.

Otherwise, he would have retired as a member of Rajya Sabha on April 9, 2020.

Kalita knows it well that the Congress does not have enough members in the Assam Legislative Assembly to re-elect him to the Rajya Sabha. 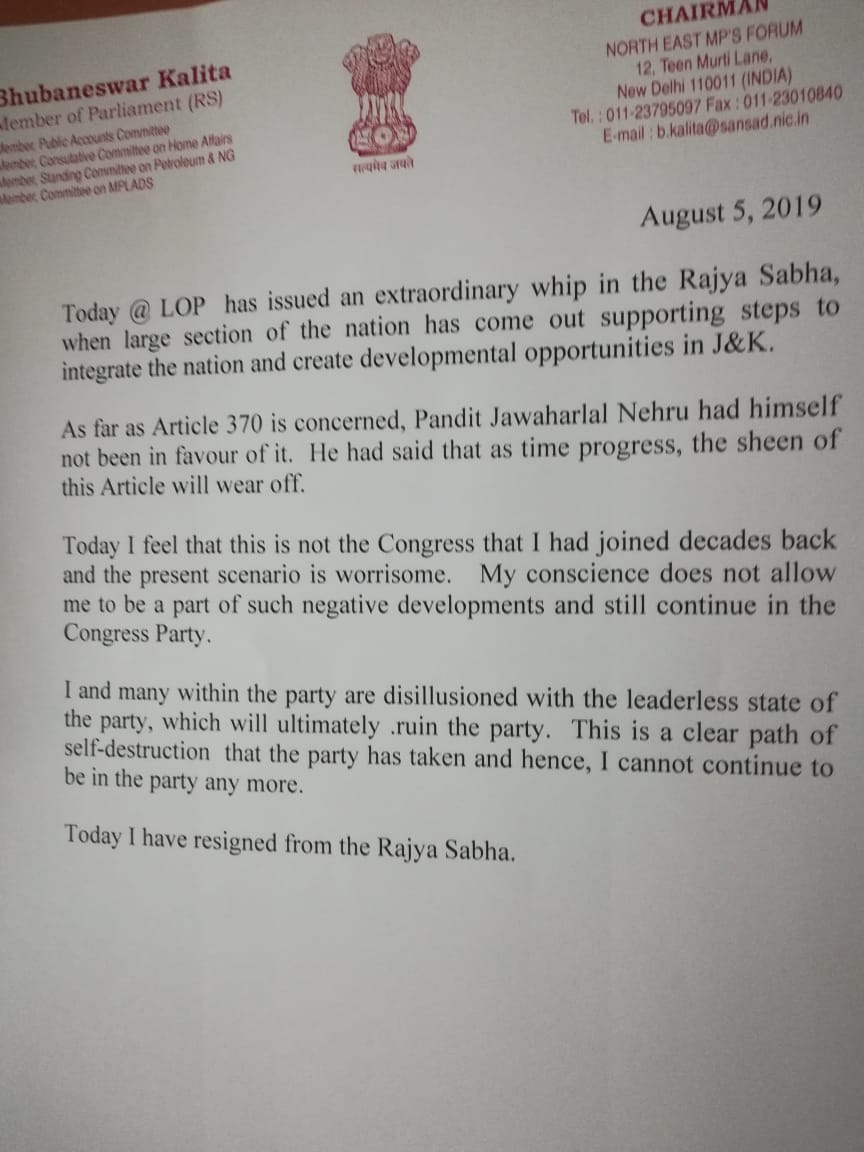 He had contested the last Lok Sabha elections from Mangaldai. But, lost to Dilip Saikia of the BJP.

The BJP will also be benefitted from Bhubaneswar Kalita’s resignation in the Upper House.

After the landslide victory in the Lok Sabha election 2019, the BJP is in no mood to let its weak strength in the Upper House stall important legislations.

Since the beginning of the session, there was a series of switchovers from rival camps.

The NDA has 116 members in Rajya Sabha, which is just a few short of the majority.

After the latest switch-over Samajwadi Party MP Neeraj Shekhar was in touch with two more MPs to join the BJP.

And, two Samajwadi Party MPs – Sanjay Seth and Surendra Nagar resigning from Rajya Sabha along with Kalita on Monday

Resignation of the three MPs, including Kalita from Rajya Sabha on Monday is a clear indicator that the BJP is going to reach the magic figure very soon.

Sources said the BJP has been looking out for those in the opposition camp who are disillusioned by their leadership.

On July 30, Assam’s controversial Congress MP Sanjay Singh had resigned from the Rajya Sabha as well as the party.

Singh, a descendent of the royal family of Amethi, had joined the BJP within 24 hours of resigning from the Congress.

Singh had said that he left Congress because “leadership is zero in the party”.