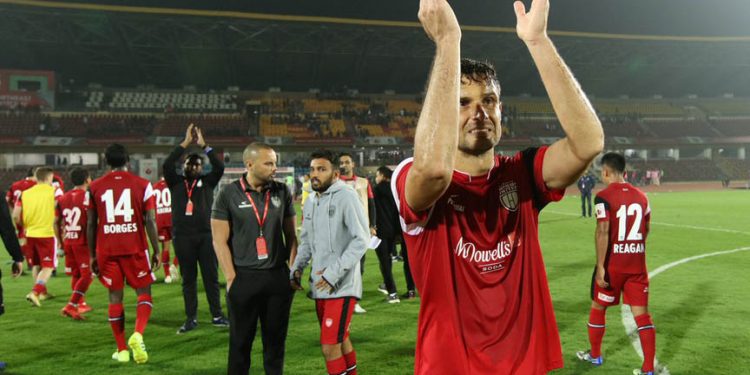 A view of the venue of the ISl match in Guwahati. Image - Twitter @NEUtdFC

In an Indian Super League (ISL) clash on Wednesday, NorthEast United FC and FC Pune City played out a 1-1 draw at the Indira Gandhi Athletic Stadium in Guwahati.

It was Rowllin Borges who broke the deadlock in the 47th minute of the match on Wednesday but Adil Khan’s world-class strike in the 69th minute salvaged a point for the Stallions, says a GOAL report.

New Colombian player Janeiler Vilas, who was recently signed by NorthEast United FC, started on the bench as Gurwinder Singh kept his place in defence.

Suspension of Marcelinho meant Phil Brown had to make an enforced change as Jonathan Vila came into a 3-1-4-2 system.

Gurwinder blocked off an Iain Hume header early on and also at the opposite end of the pitch and threatened to score, only to be hauled down by Robin Singh challenge.

Hume tapped the ball home five minutes from the half-time whistle but the Canadian was offside from the cross by Diego.

After a few minutes later, Adil Khan managed to guide the ball on target from a corner kick but goalkeeper Pawan Kumar obliged despite being blinded by teammate Rowllin Borges, says the match report.

Borges took 63 seconds to draw first blood after the change of ends.

It was Ogbeche who guided the ball between the two defenders after being played on by Puitea.

Kamaljit came off his line facing Borges, however, he failed to grab the ball as the Goan jumped over him and slotted it in front of an empty net.

That lead remained for a tad over a quarter of an hour as Pune City turned up the heat and Kuruniyan fed off Carlos whose lightning cross towards the far side saw Adil finish with a brilliant volleyed attempt.

The luck of Iain Hume eluded him once again as a close attempt only bounced off the underside of the crossbar.

Pawan Kumar did well to keep his side in the game as he slapped off an awkward looping deflection going goalwards from Kuruniyan’s shot.

The hosts were reduced to 10 men when Leudo lost his cool and elbowed Carlos twice as the Highlanders were kept waiting in their attempt to reach the playoff for the very first time ever.