‘Ishu’: Horrors of Assam’s witch-hunting through a child’s eyes

It is not only a film about witch hunting, but also about Rabha life and reality 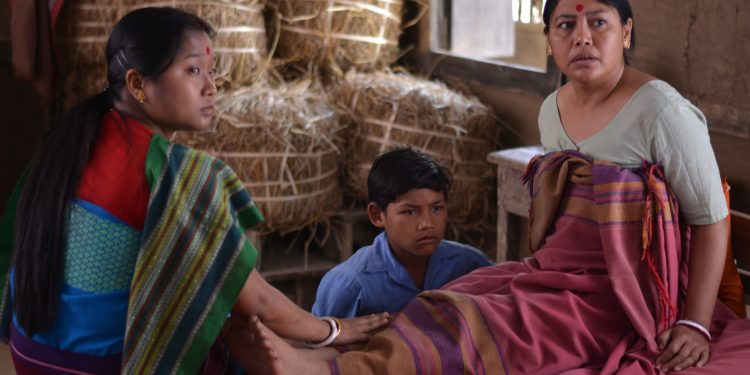 A still from 'Ishu'

When I first watched Ishu, an Assamese feature film by Utpal Barpujari, I cried almost the entire duration of the film. The theme of the film is witch hunting in the background of a Rabha village in Goalpara. It is not only a film about witch hunting, but also about Rabha life and reality. There is no artificiality in the film as the entire film was shot in a Rabha village.

The lead character is a young child called Ishu. Like any other child of his age, Ishu is a carefree, fun loving and oral teacher fearing child. Kapil Garo plays this role wonderfully.  Ishu’s aunty Ambika is another important character. This role is beautifully played by Tonthoi Leishangthem. Ambika is embodiment of feminine charm and beauty. She practices home remedies with medicinal plants found abundantly in the neighbourhood.

At times Ishu also accompanies her and she tells him the medicinal value of the plants and herbs. She tells her own story so charmingly to Ishu. Then, arrives the quack in the scene. Bishnu Khargharia plays this imposing role very well. One day when Ishu and other children are going to their school by a solitary forest path from nowhere the quack confronts them. His looks and words are so scary that it takes time for the children to come in eye contact with him.

He spreads the news of appearance of a witch in the village and speaks about the evil and ferocious power of a witch. Since then Ishu’s calm is disturbed by the imaginings of the witch. He wants to know more about the witch from the elder members of his family. But the atmosphere is such as if its mere mention will impel its existence. Then a baby sister to Ishu’s mother is born. But the baby falls ills. Ambika uses some medicinal plants to cure the child, but to no avail.

The death of the baby spreads an encircling gloom. After coming   from school Ishu finds the entire family grieving in the courtyard of the house. This is a terrific scene in the movie and Kapil plays his role stunningly. Then arrives the quack and accuses Ambika to be a witch causing the death of newborn baby and incites people to attack her. Immediately the mob frenzy takes over. They drag Ambika out from her house and beat her up. The frenzied mob also attacks her house and set it on fire.  She is subsequently chased away from the village.

Ishu is terrified by the turn of the events. To Ishu the scary image of the witch doesn’t match with the loving and caring nature his aunt Ambika. One day while playing with the children of the neighbourhood, a girl tells Ishu secretly where his aunt is hiding. Ishu silently comes home, packs some food for his aunty and leaves for the forest. On way to the forests he crosses a river by a boat and walks the eerie forest searching for Ambika.

But Ambika is nowhere to be seen. Then he remembers a trick of whistling with a single pennywort leave by making a hole inside it which he once learned from Amika. He plays it. This works wonder. He hears a counter whistling from somewhere in the forest. Following the sound he finds her hiding inside the hollow of a tree roots. He offers her the food and asks her to return home. But fearing further attacks on her she refuses to return. He leaves her assuring that he will visit her again. But he finds the boat missing.

Ishu tries to cross the river wading through the water and starts swimming when he finds the water level too deep to walk. Not being a deft swimmer he struggles with the water. At that moment from somewhere Radha, another aunt of his arrives there and seeing him drowning in the middle of the river, jumps to the river and saves him. Ishu tells Radha about meeting Ambika. With the help of police Ambika is rescued.

The greatest attraction of the film is the role of Ishu played by child actor Kapil. He is the film in a sense. His acting is flawless. We must credit Kapil and the director for this. Watching a film is a fleeting experience. By the time you make sense of a sequence it may be replaced by another sequence. In that it is different from a dance or a musical performance where there is a possibility of repetition. In music the tension is between sound and silence.

In films the tension is between the static and the dynamic. To appreciate a film a person is required to possess an aesthetic sensibility and a conscientious and inquiring mind. Like any art form there must be an intrinsic element in a film which should draw the viewer to it second time, may be third time. Perhaps, we cannot appreciate true worth of a film without a second watching.

Recently I watched Ishu for the second time and I shall surely look forward to seeing it third time too. After seeing the film for the first time, I had a long conversation with Utpal whom I know for a long time. Utpal underlined that cinema is nothing but visual storytelling.

Again to him half of the film is made while writing the script and making of the film is but the actualization of the script. Utpal is a man of few words. He doesn’t believe in exaggeration. So, you don’t see any exaggeration of music, light and sound in Ishu. It is just the exact. No more no less. That is just pleasurable. Utpal has already made a number of short films and documentaries and earned fame as a serious filmmaker. The making of Ishu has established him as one of the serious filmmakers in India.