Angami organisations not to accept anything lesser than capital punishment

An irate mob tried to break open the Kohima district jail on Wednesday assuming that Yuireingam Ronra Shimray and Ringthingchon, the two accused in the murder of Nagaland police inspector Neiphretuo Metsie-o, were lodged there.

Sources said the situation was brought under control by the police and district administration. The mob reportedly damaged a jail vehicle and two motorbikes parked outside the jail.

Yuireingam was arrested in Guwahati on Monday while his female accomplish Ringthingchon was held in her native village Lunghar in Ukhrul district of Manipur on Sunday. They were brought to Nagaland on Tuesday. However, it was not known where they are being lodged in Nagaland.

Metsei-o, who belonged to Nagaland armed police’s 5th battalion, went missing on September 7 after he left Kohima in the morning to his place of posting at Pfutsero in Phek district. His body was found in a forest between Lasumi and Zapami village under Pfutsero subdivision on September 15.

On his way to Pfutsero, Metsei-o gave a lift to three persons in his car. One of the three, a Nagaland policeman, got down half way as he continued the journey with the two, suspected to be Yuireingam and Ringthingchon.

The 37-year-old cop’s body was found by a search team of police and villagers with a bullet wound on the head and his limbs tied. He hailed from Chiechama village in Kohima district.

In a statement on Wednesday, the AYO appealed to the investigating agencies and prosecutors to press for maximum penalty and declared that they would not accept anything lesser than capital punishment to serve as deterrent for future generations. 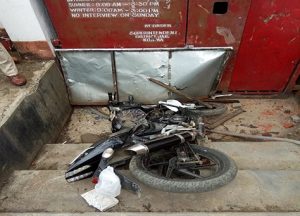 The organisation further warned that anyone trying to bail out the two accused or act as their bailer(s) would be held equally responsible for the crime. It said the Angamis would boycott them socially along with the tribe they belong to till the “barbaric” murder case was settled.

While expressing its profound gratitude to the people and police forces of Manipur, Assam and Nagaland, besides Railway Protection Force personnel, all of whom were involved in the prompt identification and subsequent arrest of the perpetrators of the heinous crime, the organisation resented the statement issued by Tangkhul tribe to which the perpetrators belong for trying to justify the crime even as the bereaved family was still under deep mourning.

The AYO also asked other tribes not to shelter any such criminals in Angami jurisdiction. It said, if anyone shelters criminals, the Angamis will hold their entire tribe equally guilty.

On March 5, 2015, a mob broke open the Dimapur central jail, dragged out a rape accused 35-year-old Syed Farid Khan and lynched him. The mob broke open the main gate of the jail by overpowering jail security, tied up the man and dragged him for seven kilometres, thrashing him along the way. He succumbed to his injuries while being dragged.