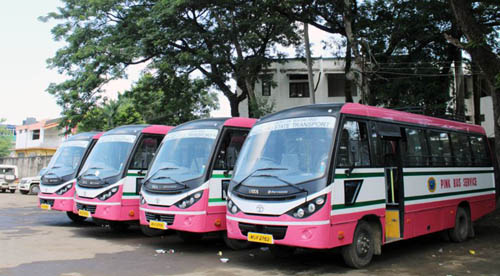 The Nagaland State Transport department has introduced City Pink Buses,  exclusively for women on a trial basis in Dimapur and Kohima from Monday.

Konyak, during a press conference after the formal flagging off, informed that the buses were earlier procured through the Jawaharlal Nehru Urban Renewal Mission (JnNURM) buses which were left abandoned at the Transport department.

Five out of the fourteen have now been refurbished and renewed, he said. The minister hoped that more repairable buses will be wheeled in the coming days.

He also expressed that the city pink buses, two each, for Dimapur and Kohima will facilitate women and ensure their safety.

He also stated that the fares will range from Rs. 10 to 25. The bus ferrying from Dimapur to Chümoukedima will have 22 stoppage points.

A taxi driver waiting for his turn to ply passengers shared that some women prefer to sit with women while travelling, so he suggested that pink buses for longer journeys on alternate days will be highly appreciated.