Prime Minister Narendra Modi on Sunday urged people across the country to share the good activities being done by the girls.

Modi has asked the people to do so across various social media platforms using the hashtag #BharatKiLaxmi as a mark of showing honour to them.

Modi asked the people to take this thoughtful step on the first day of Navaratri celebrations this year.

He suggested the people to take this step of honouring the girls in the nation in the Mann Ki Baat programme on Sunday.

While addressing the nation during the Mann Ki Baat programme on Sunday, Modi stated that Goddess Lakshmi is welcomed in homes as the harbinger of luck and prosperity in Diwali. 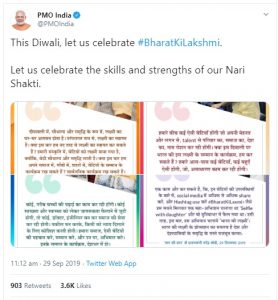 “Goddess Lakshmi is welcomed in a traditional way in Diwali. Can we not welcome Lakshmi in a new way this time?,” Modi suggested.

“According to our culture, daughters are considered to be Lakshmi as she brings luck and prosperity,” he added.

“Can we not felicitate the daughters in our villages and cities by holding public programmes,” Modi asked.

“There can be daughters among us who are bringing laurels to their families and country through their talents and hard work,” he said.

“Can we not felicitate these Lakshmis this Diwali?,” he further asked.

“There can be daughters or daughters-in-law among us who are doing extraordinary work,” he said.

“Some of them might be teaching poor children, some may be spreading awareness about health and sanitation whereas some are serving the society as doctors and engineers,” he also said.

“There may again be some who are trying to deliver justice to others,” he added.

}Respect and recognize the talents of these kind of ladies in our country,” he further added.

“We can recognize the talents of these ladies by sharing about them in social media with the hashtag #BharatKiLaxmi,” Modi suggested.

He also urged the people to make this social media hashtag stronger as a mark of honouring the girls in our country like the way the social media movement ‘Selfie with daughter’ became a huge hit.

“Encouraging Bharat ki Lakshmi means strengthening the path to success of the country and its people,” the Prime Minister said.