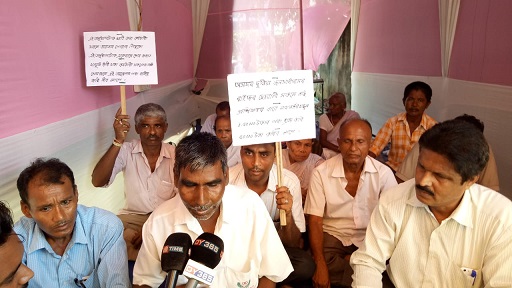 Red Cross Discharge Employee Union president Ramen Barua during their protest on Monday alleged that the Union would not let the ‘corrupt’ people to destroy the Red Cross hospital at Chandmari in the city which has a glorious past.

Lashing out at the BJP-led Government at the Centre and the State, Barua said, “Here we have not seen BJP’s ‘zero tolerance’ policy against corruption. We have been fighting for almost a decade for which we were terminated from service in 2008. We are fighting for justice. We cannot let the corrupt people to destroy the hospital for sake of money.”

Meanwhile, the general secretary of the union, Phatik Das said that the union has been continuously protesting against ‘corruption’ in the hospital since 2008.

“We called on the Assam Chief Minister, Assam Governor and Kamrup (Metro) Deputy Commissioner earlier for several times in the matter. But, we have not received any positive response. Now, we have no option but to launch an indefinite hunger strike to meet our demands and prevent corruption in the hospital,” said Das.

Das also informed that 20 employees were terminated illegally from service in 2008 by the then general secretary of hospital management society, Renuka Devi Barkataki.

“We were terminated because we raised voice against Renuka Devi’s dictatorship in the hospital and the corruption that was being carried out under her leadership,” Das said.

While demanding a probe into the matter, Das said, “I am ready to be get punished if the authority concerned finds my allegations wrong.”

However, despite several attempts Bujarbarua could not be contacted for his comments.

Talking about the training of nurses, the union demanded that the admission fees of the students be reduced from Rs 1.5 lakh to Rs 50,000.

Das questioned, “What is the reason of taking 1.5 lakh as admission fees from the girls as the State Government provides funds for nurses training?”