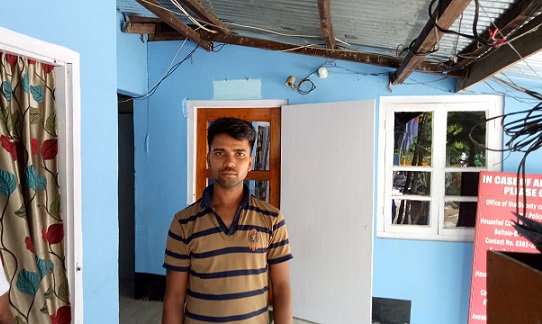 Acting on a tip-off, Dispur Police arrested a fraud from Bharalumukh Shantipur area in Guwahati on Tuesday evening on charges of allegedly cheating a person.

Police nabbed the youth from his rented room at Shantipur area in co-operation with Bharalumukh Police.

The 27-year-old youth, who hails from Samastipur town in Bihar, has been identified as Sanjay Thakur.

Das said Thakur had fraudulently withdrawn a total amount of Rs 80,000 from the SBI bank account of one 55-year-old Satish Talukdar, a resident of Basistha, using the latter’s ATM card on August 16, 2018.

“The accused had withdrawn Rs 40,000 from Talukdar’s SBI account from an SBI ATM at Six Mile and transferred another Rs 40,000 to his own account. Talukdar immediately came to Dispur Police Station and lodged an FIR after he received SMSes of cash withdrawal in his mobile phone,” said Das.

Talking to Northeast Now, Talukdar said, “There were two boys when I entered the SBI ATM kiosk at Khanapara near the APSC building. When I faced some trouble in withdrawing cash from the ATM, they offered me to help. But, one of the boys asked me to visit the SBI Khanapara branch where I have my account saying that there was some problem in my ATM card. In the meantime, they exchanged my ATM card which I couldn’t detect.”

A case (no 2361/18) has been registered at Dispur PS against Thakur under sections 420 (Cheating and dishonestly inducing delivery of property) and 379 (Punishment for theft) of the Indian Penal Code (IPC).

The ACP informed that police would seek the accused under police custody for further investigation into the case.

Police also seized another ATM card from the possession of the arrested youth.