Gorkhas protest against NRC, refuse to go to FTs 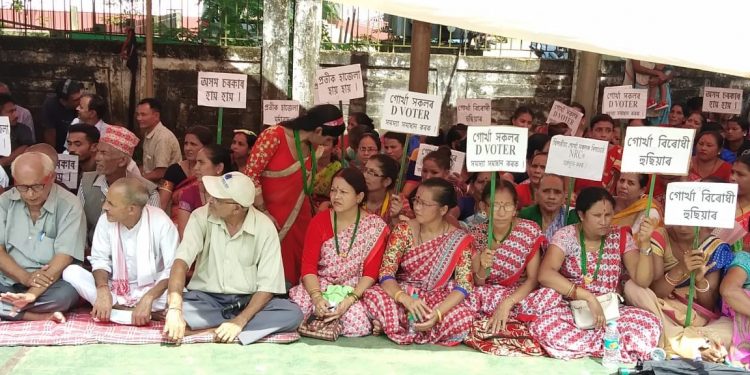 People belonging to Gorkha community stage a protest in Goalpara on Friday.

The All Assam Gorkha Students Union (GSU), Gorkha Sanmilan and other organisations on Friday staged a demonstration in front of the Goalpara DC office against the non-inclusion of about 1 lakh Gorkha people in the final list of the National Register of Citizens (NRC).

“We are not going to the Foreigners Tribunal to prove their citizenship. If one lakh Gorkha need to go the detention camp, our entire population in Assam, near about 25 lakh together will follow the suit,” Lohit Chetry, president of the GSU told reporters.

Chetry further further alleged that Gorkhas have been intentionally dropped from the final NRC.

“We feel that we have been intentionally dropped despite having all the valid documents,” he said.

The GSU leader said there are thousands of freedom fighters, army men from Gorkha community, who have served the country.

Around 300 people belonging to Gorkha community staged a protest and shouted slogans against the NRC state coordinator Prateek Hajela.

‘Hajela go back; don’t harass the Gorkhas’ were some of the slogans shouted by the agitators.