In a show of strength in Jorhat, the All Assam Students’ Union (AASU) threw its full weight behind the Assam Women’s University, leading a huge people’s procession through the streets of the town on Thursday.

In Dispur the Assam government did a double take and declared that the University would be “strengthened” and “protected.” But not before pandemonium had reigned supreme in the Assam legislative Assembly and the house had to be adjourned by the Speaker for 15 minutes. 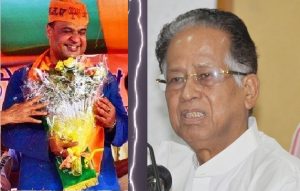 How the government plans to strengthen the University is yet to be made clear. However,  for the time being and with the panchayat elections around the corner,  the government in all likelihood felt that the time was not right to lock horns with a united students’ force–the SFI,  the SMSS,  the AJYCP and the AASU along with the Congress.

In the Assembly, Congress Legislative Party members created a ruckus for half an hour when the Speaker Hitendra Nath Goswami refused to allow former chief minister Tarun Gogoi to raise the Assam Women’s University.

A shouting match ensued between the opposition and ruling party legislatures at the well of the house forcing the Speaker to adjourn the house for 15 minutes.

When the Assembly resumed, the bedlam continued, forcing the speaker to allow Gogoi to make a submission on the issue.

Gogoi,  while making it clear about how the mentor was appointed by the commissioner Hemanga Kishore Sharma and he was not to blame,  while at the same time admitting that he may have made a mistake in appointing a mentor and then retracted that it was not a mistake, in the same breath.

The former chief minster argued that if the bone of contention was that a mentor was appointed instead of a vice chancellor then why had this BJP led government which was in place for the past two years continued with the same “mistake”.

Gogoi  said why should a new committee be formed to suggest what should be done with the University when in June 2017, a committee set up by the Principal secretary Ajay Tiwari had recommended that AWU be made into a affiliating University and should not be merged with any other institute.

He further said that when chief minister Sarbananda Sonowal attended the University court in September 2016 he had said that he would create posts and sanction fund for Infrastructure expansion.

Rezoning to Gogoi’s comments, Minister Sarma said that for the past six to seven months he had been in discussion with the speaker on how to strengthen the University and had asked Goswami who had been an advocate to explore the legal options and also that he had left it to the Speaker to do what he thought best as the University fell in his (Goswami’s) constituency.

He said that he did not understand what the hue and cry was about, why everyone was shouting tiger, tiger, when there was no tiger.

At the end the Speaker declared that the Assam Women’s University would be protected.

Responding to Sarma’s statements to the media that the teachers were fomenting the students to agitate both the students and section of teachers denied this.

The students in a press communique said that they were not gullible and could not be fooled into doing something on someone’s say so and were agitating because of the statements made to the media regarding degrading the university into a technical institute and about the invalidity of the qualification certificates signed by a mentor, a post which was not included in the Act passed by the Assam Legislative Assembly in 2013.

A section of teachers on the other hand said that the faculties and students have been taken for a ride for no fault of their own.

In response to Sarma’s statement that there were only contractual teachers in the University and no associate professors or professors insinuating that the standard of teaching may not be upto standard of a university, the teachers said that many young bright faculties joined and left the university for higher studies and jobs elsewhere once they saw that AWU was going nowhere.

Advertisements were issued couple of times for filling up the posts of associate professor and professor by the AWU administration but probably at less than half the remuneration usually given, nobody applied for these positions.