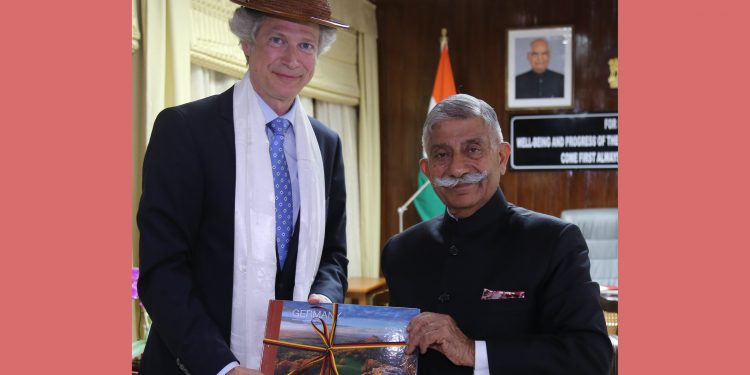 A German delegation led by Dr Jasper Wieck, the charge d’affaires of German Embassy, New Delhi on Thursday called on Arunachal Pradesh governor BD Mishra at Raj Bhavan in Itanagar during which they discussed about areas of mutual interest and cooperation, particularly in the power sector.

Highlighting on the vast potentials of Arunachal Pradesh in hydropower, the governor said that with better ties between India and Germany, the German government can cooperate with Arunachal in line with Indo-German Energy Pact signed between the two countries.

The governor emphasized on the cooperation with the German government in the fields of capacity building, training and establishment of a state-of-the-art training Institute in Arunachal Pradesh in the fields of solar and hydropower energy.

Mishra called for mutual cooperation in the formulation and establishment of smart grid projects in the State and co-operation in the field of electricity system strengthening and infrastructure improvement.

He also called for exploring the possibilities in technical promotion of solar and wind energies.

The governor further suggested for exploring the scope for cooperation in the hydro power projects in Arunachal Pradesh, which are being developed by Independent Power Producers (IPPs) and for technical cooperation for reducing the cost of construction and operation of such projects.

The governor stressed on cooperation between Indian and German Universities in academic programmes in higher and technical education, such as student and faculty exchange programmes, etc.