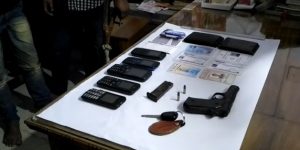 One pistol, one magazine and other ammunition along with mobile phones, incriminating documents and a car bearing registration No AS-01-AG-9528 has also been recovered from their possession.

Police sources said they were planning to kidnap a businessman from Hatsingimari in South Salmara of Assam.

Meanwhile investigation is on and the police are conducting marathon interrogation of the arrested militants.