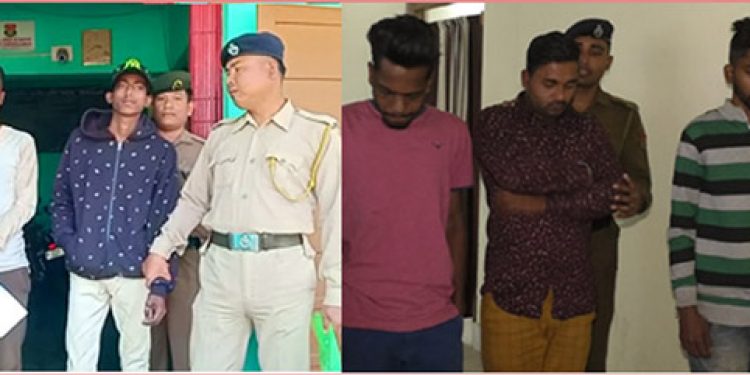 Kalyanpur police arrested two youths along with heroin from Kalyanpur Bazar Colony area under Khowai district of the state on Thursday.

The youths, who were arrested by Kalyanpur police, have been identified as Ajoy Sarkar and Jiten Barman.

They were initially apprehended by locals red-handed along with drugs while they had gone to Kalyanpur Bazar Colony area in a two-wheeler for handing over the consignment of heroins.

After apprehending the two drug peddlers, the locals handed over them to the police.

Police have booked them under the Narcotic Drugs and Psychotropic Substances Act, 1985, commonly referred to as the NDPS Act and interrogation is on, said officer-in-charge of the Kalyanpur Police Station, Santosh Shil.

In the meantime, New Capital Complex police in Agartala arrested three youths along with brown sugar and marijuana from Durjoynagar area in the afternoon.

It may be mentioned that Biplab Kumar Deb after taking charge as the Chief Minister of Tripura promised to make Tripura a drugs-free state.

He said Tripura was a “hub of drug supplies” to other states during the previous Left Front government’s rule.

“Due to inactive governance… Tripura had become an area prone to illicit drugs and a hub of drugs supply to Bihar, , and other states,” the CM alleged at a function held in Agartala on the last Teachers’ Day.

Deb also said that abuse of illicit drugs in Tripura had spoiled the future of a large number of youths, especially students.

Tripura CM Deb said, the BJP-led state government has adopted a zero-tolerance policy against illicit drugs after coming to power in March.