Five-day cultural extravaganza: 44th Karbi Youth Festival gets off to a colourful start

A view of the 44th Karbi Youth Festival.

The 44th Karbi Youth Festival (KYF), one of the biggest ethnic festivals of the Northeast, which is a five-day cultural extravaganza, started with a colourful Rongketong, a traditional procession at the Karbi People’s Hall, Taralangso in Diphu on Friday.

The KYF is an annual event organised by Karbi Cultural Society (KCS).

The KAAC CEM said, “I know the financial constraints faced by every KCS Zone to get traditional dresses for the artists. In the next KYF, we will provide choi hongthor (male tunic), seleng (lower body garment for male) and poho (turban for male) and pini (sarong) and pekok (shoulder cloth for girls) and one pair of chengpi (traditional drum).” 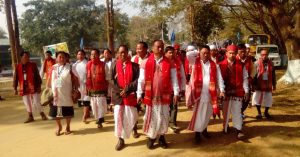 The CEM further said, “I discussed with KCS president Chandra Sing Kro about the communication problem to Taralangso as the road is too narrow. In last year’s festival, I was stranded for one hour on the road. In order to ease the traffic, the PWD has taken up the widening work. But in between there were problems with land owners to give land and so, it could not be completed before the festival (KYF). But in next year’s 45th KYF, the four-lane road with a divider with street lights will be completed.”

The CEM said there are many more works to be done in Taralangso. Last year Rs 50 lakh was granted by the KAAC for the improvement of Rasingja Aklam and the work is in progress now. He also said that as per United People’s Democratic Solidarity’s (UPDS) Memorandum of Settlement (MoS) Rs 98 crore has been sanctioned by Central government for development of Taralangso.

For the convenience of the public, information about the KYF has been given in KAAC website. The KAAC authority will be support KYF every year.

Ronghang also said the people have to keep on demanding Autonomous State under Article 244 (A) at the same time they will have to work for the development of the region.

Earlier, KCS president Chandra Sing Kro in his presidential speech recalled the contributions of Roy Enghi, Lunse Timung and Jonasing Terang, who organised the KYF way back in 1974 at the Karbi Club here.

He said, KCS should be made the symbol of Karbi culture without interference from politics and this has been possible now. Kro expressed his gratitude to KAAAC CEM Ronghang for his support towards the KYF.

All together 32 Zones including Dumra and Biswanath Chariali and from Diphu Government College and Eastern Karbi Anglong College, Sarihajan are participating in the festival.

KAAC has allotted Rs 50 lakh for the festival and the employees of 30 departments under KAAC have contributed one day’s basic pay towards the KYF.

The artists from artist camps of 32 Zones in procession with the beating of traditional drums and dancing reached the field for inaugural programme. Cultural troupes of different ethnic tribes and communities with their traditional attire took part in the inaugural function.