I have not joined the BJP with a hope to become an MLA or Minister: Bichitra 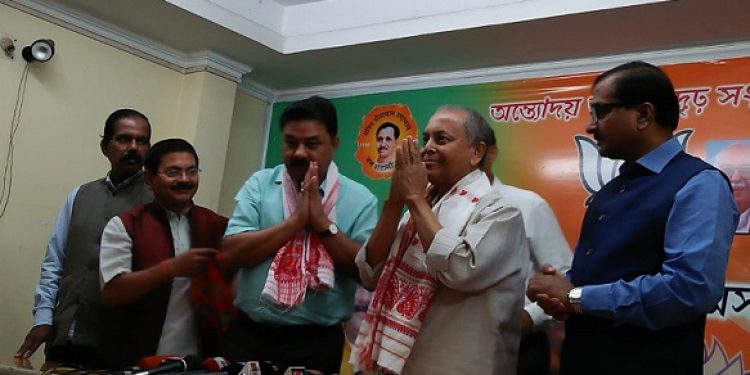 A view of joining ceremony at Assam BJP headquarters in Guwahati on Sunday. Image - Northeast Now

Choudhury joined the saffron party during a programme organized at the State BJP headquarters in Hengerabari here.

The State BJP president welcomed Choudhury to the saffron and felicitated him with Assamese gamosa and jaapi.

It may be mentioned that Bichitra Choudhury worked as a staff reporter of the Assamese daily newspaper ‘Danik Asam’ from 1998 to 2000.

After joining the BJP, Choudhury said, “I have not joined the BJP with a hope to become an MLA or Minister. I have joined this party after being impressed at the party ideologies of BJP.”

Ahead of the Panchayat polls in Assam, shifting of party has started across the State.

As the names for the candidates are being collected by leading political parties, even when the dates for submission of nomination papers has already begun, from 9th of this month, not finding their names in the likely list of candidates for a final one, resignations have started to tumble in.

Not finding her name to be among the final list for the post of Gaon Panchayat president for Berenga, she decided to quit the party and contest elections from all likelihood, with the Assam Gana Parishad (AGP) ticket.