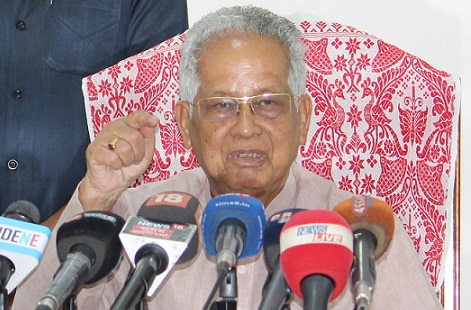 The former Chief Minister (CM) of Assam, Tarun Gogoi, ripped apart the Bharatiya Janata Party (BJP) on Tuesday in a Press conference in Guwahati and said that the saffron party, talking too much about Hinduism and Hindutva has, in fact, “boomeranged on the Hindus”.

A report published in Pratidin Time quoted the former CM as saying, “BJP talks about Hinduism but they have caused more harm to Hindus than any other political party.”

The report further stated that Gogoi, while speaking about the recent carnage at Dhola in Tinsukia district of Upper Assam, said, “All the five deceased in the Dhola massacre were Hindus. Most of the people left out of the National Register of Citizens (NRC) final draft are also Hindus, even the missing Revati Gogoi, mediator between United Liberation Front of Assam (Independent) (ULFA-I) and the Centre is a Hindu.”

“The recent victims of rape and murder in Assam are all Hindus,” fumed Gogoi. He also stated that the Assam Home Department’s “total failure” to maintain law and order has led to a “chaotic situation in the State”. Smelling a “political link” to the Dhola massacre, he added, “The Dhola killings is the biggest case-in-point pointing towards the Home Department’s complete failure and I feel there is a political conspiracy behind the whole incident.”

Talking about the forthcoming Panchayat elections in Assam in the month of December, Gogoi felt that the Asom Gana Parishad (AGP) and the BJP might “part ways”. He was optimistic that the Congress would put up a “good show” in the Panchayat elections. The former CM appealed to the people of Assam to celebrate Diwali with lights and “refrain from bursting high-decibel crackers which causes a lot of pollution”.