TCLPeF’s meeting in Changlang is scheduled to be held on October 4, 2019

The meeting called by the TCLPeF is slated to be held on October 4, 2019 at the district headquarters of the Changlang district.

The ENNG urged the people of the TCL to refrain from attending the meeting saying that it has ‘hidden and malicious agenda’. 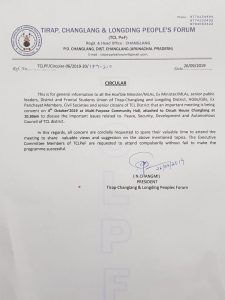 The ENNG alleged that the TCLPeF only serves as a mouthpiece acting as a lobby to garner support for the NSCN (IM) by deceitfully manipulating the public opinion.

The ENGG, which claims of foiling efforts of the TCL PeF earlier at Deomali, stated that political and democratic self determination and issues like Autonomous Council lies solely with the people rather than forums like TCLPeF do not have befitting public consensus.

Tosham Mossang, one of the key office-bearers of the ENNG during an interaction with Northeast Now expressed his solidarity with the cause of the people of the three districts of TCL.

“The people of Tirap, Changlang and Longding have every right to demand for an Autonomous Council for better administrations and an accelerated development and in that case the only concerned or negotiating parties should be the government of India and the people of TCL and certainly not the NSCN (IM) or TCL PeF to act on behalf of the people,” reads the communiqué. 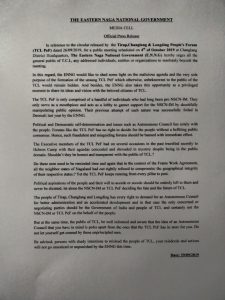 The ENNG said the persons with shady intentions would not go unpunished for misleading the people of the TCL.

The TCLPeF in a circular issued on September 26 called for a meeting on October 4 at the Multi-Purpose Community Hall in Changlang to discuss issues on peace, security, development and autonomous council of TCL districts.

N. Changmi, the president of TCL PeF through the circular, expected that several ministers and MLA s, both present and former, senior public leaders, students’ body, civil societies, senior citizens and Panchayat members of entire three districts of Tirap, Changlang and Longding, would attend the meeting.