Mahendra Singh Dhoni will be leading the side.

Dhoni has been one of the most successful captains in the history of the Indian Premier League as he has won 3 IPL trophies as a captain and played in nine of the 12 finals so far.

Dhoni is the most successful captain in the IPL in terms of the number of matches won throughout the tournament, reports said.

Taking to Twitter, Jaffer posted his team in which Chris Gayle, Andre Russell, Rashid Khan and Lasith Malinga are the four foreign players in his 12-member team. 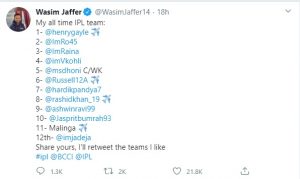 With all the cricketers being in isolation due to the outbreak of the Covid-19 virus, it has given them time to interact with their fans through social media.

Jaffer also conducted a Q&A session on his Twitter account wherein he has made some interesting choices and revelations.

The opening pair will have Rohit Sharma and Chris Gayle.

The traditional fifth spot has been kept for M S Dhoni to be followed by Andre Russell to add power to the middle order.

Hardik Pandya and Rashid Khan are the the two all-rounders in the team.

Ravichandran Ashwin, Lasith Malinga and Jasprit Bumrah will take charge of the ball along with Rashid Khan.

Ravindra Jadeja has been kept as the 12th man in the squad.