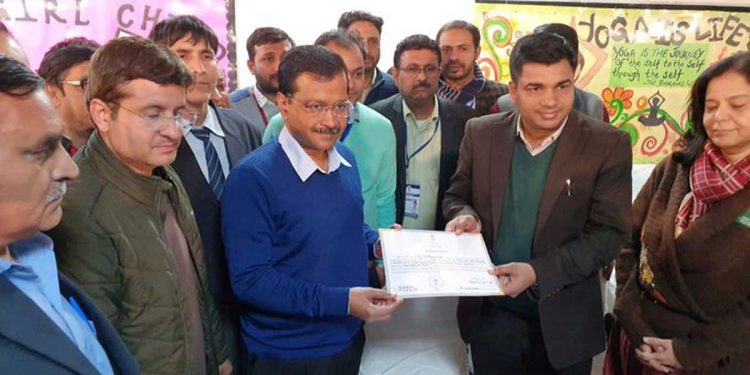 Arvind Kejriwal-led Aam Aadmi Party (AAP) stunned the BJP and returned to power in Delhi for the third time by winning 62 seats.

It was a major setback for the saffron brigade which had a landslide victory in the last parliamentary election in the national capital.

In the 70-member Delhi Assembly, the BJP could win only 8 seats. However, the party could increase its vote share and won five more seats compared to 2015 polls while the Congress failed to open its card this time too.

While addressing his party workers in New Delhi, Kejriwal said: “Dilliwalon (residents of Delhi), I love you.”  He termed the poll verdict as “win for Bharat Mata (Mother India)”.

Earlier on the day, Kejriwal while addressing his supporters said: “This is a win for Mother India.”

Kejriwal waved and blew his supporters kisses, and said he “loved the people of Delhi”.

Kejriwal also began a roadshow after addressing his supporters.

The 51-year-old former bureaucrat rose to political fame as an anti-corruption campaigner.

Kejriwal first became chief minister of Delhi in 2013 and was then re-elected in 2015 with a landslide victory.

Kejriwal has been credited with turning around Delhi’s government-run schools, establishing affordable neighbourhood clinics and providing cheap water and electricity.

A media report quoted Kejriwal as saying: “It’s not just my win. This is a win for every family whose children are now getting a good education in school, whose family members are getting good treatment in hospitals.”

Kejriwal also led a victory parade from the AAP office to the Hanuman temple in the city centre, after saying his party’s victory was a blessing from Hanuman, the monkey god.

Celebrations were held outside the AAP office where party workers claimed that the win vindicates their decision to campaign hard on “good governance and development” and refrain from “divisive politics”.

Nearly 61 percent of Delhi’s 14.7 million voters cast their ballots on Saturday in elections believed to be a litmus test for Prime Minister Narendra Modi in the wake of deadly anti-government protests that erupted nearly two months ago.

Meanwhile, Prime Minister Modi has congratulated APP and Kejriwal for the win.

Modi tweeted: “Congratulations to AAP and Shri @ArvindKejriwal Ji for the victory in the Delhi Assembly Elections. Wishing them the very best in fulfilling the aspirations of the people of Delhi.”

While thanking the PM for his tweet, Kejriwal said:  “Thank u so much sir. I look forward to working closely wid Centre to make our capital city into a truly world class city.”

Thank u so much sir. I look forward to working closely wid Centre to make our capital city into a truly world class city. https://t.co/IACEVA091c