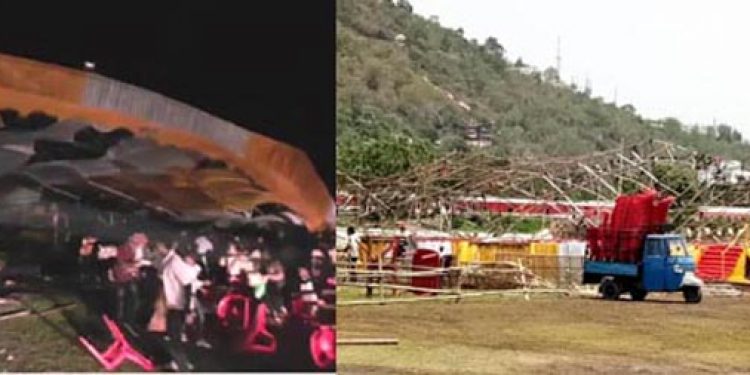 A view of the damaged Maligaon Stadium Bihu pandal after being hit by cyclone. Image - UB Photos

Due to the massive cyclonic storm that hit Assam and other northeastern states in the wee hours on Wednesday, Assam Power Distribution Company Limited (APDCL) had to cut power supply up to 500 MW across the state.

The cyclonic storm caused serious damage to electrical infrastructure in many parts of Assam.

Informing about the damage electrical infrastructure and unavoidable curtailment of power supply, the APDCL on its Twitter handle on Wednesday regretting for the inconvenience caused due to the power cut, urged the consumers to bear with it.

APDCL while sharing a notice stated that restoration works have been undertaken by the company on war footing basis to ensure expeditious restoration.

The APDCL in the notice stated: “Cyclonic storm at wee hours on 17.04.2019 has caused serious damage to electrical infrastructure in many parts of the State, which has resulted in unavoidable curtailment in power supply to the extent of 500 MW across the State. Restoration works are undertaken by APDCL on war footing basis to ensure expeditious restoration. Inconvenience caused in this regard is deeply regretted. All our valued consumers are requested to bear with APDCL in speedy restoration.”

It may be mentioned that the cyclonic storm followed by heavy downpour left a trail of destruction across Assam including Guwahati and other parts of Northeast India.

The thunderstorm, which was accompanied by cyclonic winds, severely affected several parts of Assam in the wee hours on Wednesday.

Several billboards across Guwahati were blown away by the strong wind and caused extensive damage to several Bihu pandals put up across the capital city of Assam.

In different parts of the city, several trees were uprooted causing damage to parked vehicles.

The wind was so heavy that several tinned roofs were blown away leaving the residents to spend the rest of the night under the open sky.

The Latasil Bihu pandal in Guwahati has also been ravaged to the ground completely.