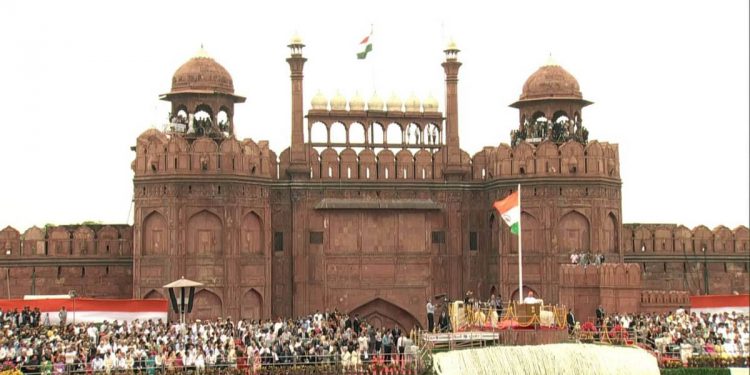 In the wake of COVID-19 pandemic, the Independence Day celebrations at Red Fort this year might not be a grand affair.

With social distancing norms in place, the Red Fort this year might not see a large gathering on August 15.

An official at the Red Fort said that the Independence Day celebration this year might witness a limited gathering, which could be one third or even less in comparison to the previous years.

The official further added that the security agencies would strictly adhere to social distancing norms.

Adding further the official said, “Delhi Police would be manning the outer layer of the security ring as the security of the Red Fort has been taken over by the Defence Ministry and the Prime Minister’s security.”

The official also informed that the seating arrangements for the dignitaries would be according to the social distancing guidelines.

“There would be less chair this year and the decision on the entry of the general public is still under consideration,” the official added.

The official added that there would be 4 isolation chambers, two inside and two outside the Red Fort.

“Moreover, the number of ambulances deployed this year might be more than previous years, the staff of the Red Fort would also undergo the COVID-19 test,” the official added.

The official added that keeping in mind their safety, school children might not be allowed to take part in the Independence Day celebration this year.

The official further informed that gadgets would be used for security checks to maintain social distancing and a watch would be kept at the Red Fort premises and the surrounding areas via CCTV cameras.

DCP north Monika Bharadwaj further informed that the Delhi police had conducted a mock drill to check the preparedness ahead of Independence Day.

She said that the exercise was conducted to check the preparedness of various agencies for any eventuality.

The drill was conducted along with the DDMA, CISF, ASI, CATS, PCR, Traffic and other agencies, Bhardwaj said.