As the second wave of Covid19 has affected various states across the country, Congress leader Rahul Gandhi has urged the Centre to reconsider conducting the CBSE examinations.

Talking to Twitter on Sunday, former Congress president Rahul Gandhi said: “In the light of the devastating Corona second wave, conducting #CBSE exams must be reconsidered. All stakeholders must be consulted before making sweeping decisions.”

In the light of the devastating Corona second wave, conducting #CBSE exams must be reconsidered. All stakeholders must be consulted before making sweeping decisions.

On how many counts does GOI intend to play with the future of India’s youth?

The Congress leader questioned: “On how many counts does GOI intend to play with the future of India’s youth?”

“Our education system needs to drastically alter its attitude and start reflecting sensitivity and compassion towards children rather than just talking about it,” Priyanka Gandhi wrote.

In a letter to Union education minister Ramesh Pokhriyal Nishank, Priyanka said “lakhs of children and parents from all over India have been expressing their fears and apprehensions about assembling at exam centers to sit for the exams in the middle of the second wave of COVID-19”.

“These apprehensions are not unreasonable; indeed, they are well founded. It will be practically impossible to ensure the safety of students at large and crowded exam centers,” she said.

She said “by forcing the children to sit for these exams during a raging pandemic, the Government and the CBSE board will be held responsible in the event that any of the exam centers prove to be hotspots at which large numbers of children become infected with the disease”.

Priyanka said being forced to sit for exams donning masks, gloves and other protective gear under the specter of a deadly disease will cause unnecessary anxiety to these children and impact their ability to perform as well.

She hoped that the government would engage in a dialogue with schools, students and their parents so that a safer way for them to fulfil their educational obligations can be found. 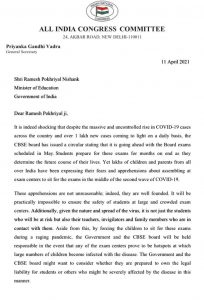 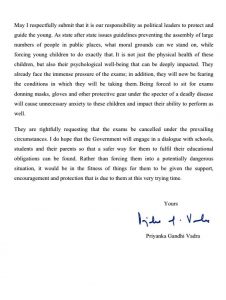 “Rather than forcing them into a potentially dangerous situation, it would be in the fitness of things for them to be given the support, encouragement and protection that is due to them at this very trying time,” Priyanka added.

Not just Congress but leaders from Shiv Sena too have been demanding a common decision from Centre for Class 10, 12 board exams across states.

Shiv Sena leader Arvind Sawant has written a letter to Union education minister Ramesh Pokhryal Nishank: “All these students come in an age group that has not been allowed to be vaccinated by the Union Health Ministry.”

“The exams due in a few days will have millions of students and their families, their teacher, invigilators, non-teaching staff at a high risk considering the virulence of the current pandemic,” Sawant said in theletter.