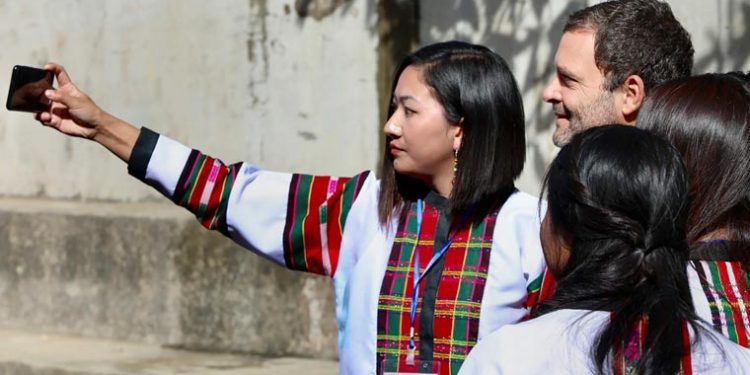 Congress President Rahul Gandhi obliges his supporters for selfies during an election rally in Champai, Mizoram.

Mizoram will see a multi-cornered contest in the November 28 Assembly polls with the normally two main contenders – the ruling Congress and main opposition MNF – now seeing a third actor in the BJP and three regional parties ZPM, NPP and PRISM.

The BJP has put up the maximum number of 39 candidates for the 40 seats while the MNF and Meghalaya-based NPP have fielded 40 and nine candidates respectively.

Local party ZPM and the NGO-turned newly floated People’s Representation for Identity and Status of Mizoram (PRISM) are also in the fray in the contest in the Christian dominated state bordering Myanmar and Bangladesh.

The ZPM has nominated 34 candidates and PRISM 14.

Lalduhoma, whose Zoram Nationalist Party (ZNP) which he formed after leaving the Congress in 1986, is the dominant party in ZPM.

“BJP and NPP do not have much base in Mizoram. If any of their candidates win, it will be on the basis of that person’s abilities and personality,” said a Mizoram University political science professor who declined to be named.

He said that though Mizoram never had a hung assembly since it became a full-fledged state in 1987, this time the situation was different.

The Congress, which has been in power except for 10 years since 1987, has for the first time suffered a major setback ahead of the elections as five key leaders, including Home Minister R. Lalzirliana and Speaker Hiphei, have quit the party and the Assembly.

Three other legislators, Lalrinliana Sailo, Buddha Dhan Chakma and Hmingdailova Khiangte, have also resigned from the party, reducing the Congress strength in the house from 34 to 29.

While Lalzirliana and Sailo joined the MNF, Hiphei and Chakma joined the BJP. Khiangte is contesting as an independent.

The BJP is determined to oust the Congress after forming governments on its own or in alliance in six other Northeastern states excluding Sikkim.

Though the MNF is a constituent of the BJP-led North East Democratic Alliance (NEDA), no pre-poll alliance exists between the BJP and MNF.

Political experts say the MNF may ally with the BJP after the polls.

Meghalaya Chief Minister Conrad Sangma-led NPP is trying with all its efforts to woo the tribals and Christians in poll-bound Mizoram, hoping to set up the base into another state in the northeast.

“We are a party for the cause of the tribals and are working hard to restore tribals’ identity as one voice from the northeast,” Conrad Sangma, from Meghalaya’s Garo tribe, told election rallies in Mizoram.

Political analyst and social activist R. Sailo told IANS: “The NPP, ZPM and PRISM are likely to emerge as kingmaker.”