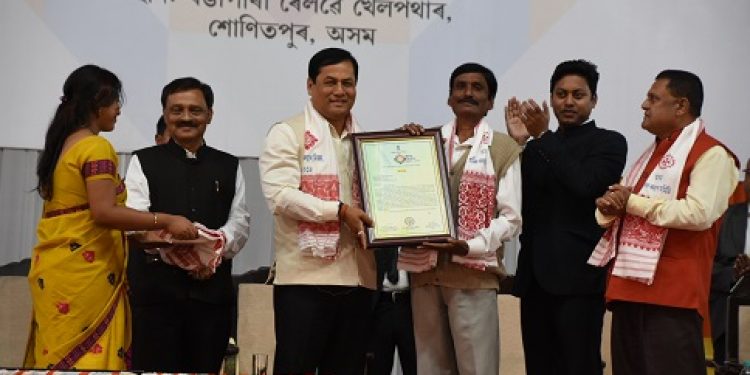 Assam Chief Minister Sarbananda Sonowal on Friday said that he is fully committed to safeguard the interest of the people of the State.

Under his leadership the culture, language, literature and rights of the Assamese people over their land is fully secured. Chief Minister Sonowal made this assertion while speaking at the celebration of Shramik Kalyan Divas at Rangapara in Sonitpur district on Friday.

The Shramik Kalyan Divas is being celebrated in recognition to the remarkable services of notable tea community leader and social worker Santosh Kumar Topno on his birth anniversary since last year. The programme was organized by the Labour Welfare Department, Government of Assam in association with Sonitpur district administration.

Addressing a mammoth gathering, the Chief Minister said that some vested interest groups were trying to destabilized the pace of development unleashed by the state government and spreading misinformation about its commitment towards the people of the state.

“I am a son of the soil and the people of the state entrusted me with the responsibility to lead Assam towards progress. I am committed to safeguard the interests of the people and no one should try to misguide the people on my intent,” he said.

Stating that the state government has been extending sincere service in the preparation of an error free NRC to free Assam from illegal foreigners, he said that in the aftermath of publication of the final draft of NRC, several organizations raised doubts of inclusion of names of illegal foreigners in the draft. Now the honourable Supreme Court has set a deadline for filing claims and objections. Therefore the organizations which raised their concerns must come forth and file objections. Similarly all genuine Indian whose names were not included in the draft should file their claims, he said adding that the response so far has been not satisfactory.

Moreover, terming the workers as one of the strongest pillars for leveraging growth of a nation, Sonowal came down heavily against the neglect and apathy of the previous state governments in upholding the interest of the workers and tea garden people.

He said that Assam is known in the world because of Assam Tea. But the people who actually produce the Assam Tea remained neglected for last seven decades of India’s independence. Now the state and the central governments have come forth with a committed zeal to uplift the condition of the workers and the tea garden community in Assam.

He also underlined the immense potential of the tea garden people and their hard working nature and reiterated that the state government has already launched series of initiatives to ensure better and dignified life for them. He also highlighted the great contributions of tea community leader Santosh Kumar Topno and Simon Singh Horo and called upon the people to follow their footsteps to develop a more cohesive, harmonious and vibrant Assam.

Sonowal also ceremonially distributed benefits under Assam Building and Other Construction Workers’ Welfare Board to nine beneficiaries. He also presented certificate of appreciation to several organizations and tea gardens who were working for welfare of the tea garden community. Chief Minister Sonowal along with other dignitaries also released a souvenir on the occasion.