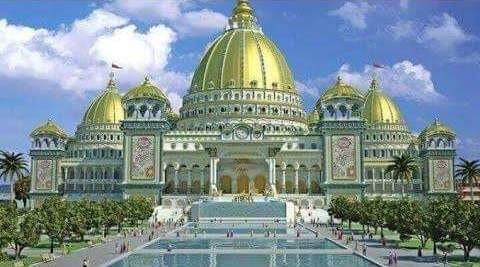 In order to start the construction of the Ram Temple in Ayodhya, the clearing of the Ram Janambhoomi site began on Sunday.

Heavy earth-moving machines have begun the process of leveling land and clearing bushes in the 67.7 acre premises of the Ram Janambhoomi site.

Ram Lalla idols will be shifted 150 metres from the sanctum sanctorum of the makeshift temple to Manas Bhawan and placed in a bullet proof fibre structure till the temple is constructed.

However, it has not yet been decided whether the twelve ancient temples would be a part of the Ram Temple or relocated elsewhere.

As per reports, the Trust which had been formed for the construction of Ram Temple will decide the fate of the twelve ancient temples.

Prime Minister Narendra Modi announced the formation of a trust for the construction of Ram Mandir in Ayodhya last month.

While making a speech in the Lok Sabha, Modi had said that the trust-Sri Ram Janmabhoomi Teertha Kshetra- will be formed according to the orders of the Supreme Court.

“The Shri Ram Janmabhoomi Teertha Kshetra will be formed. This is the trust that was to be formed in line with the verdict of the Honourable Supreme Court of India,” he added.