Viswa Hindu Parishad’s clarion call to rise and bring about a bill in parliament for constructing the long standing demand of Ram mandir in Ayodhya, can raise a lot of eyebrows, let alone, even ear flaps of the passerby. 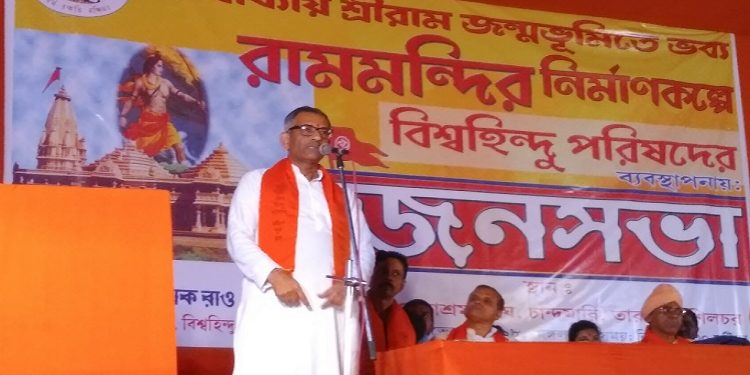 Rastriya Sangathan Mantri of VHP, Vinayak Rao Deshpande addressing a meeting in Silchar to raise mass appeal for the construction of Ram mandir in Ayodha on Monday. Photo: Aparna Laskar

At a time when the state of Assam is knee deep with the task of holding a much fancied panchayat polls slated next month, Viswa Hindu Parishad’s (VHP) clarion call to rise and bring about a bill in parliament for constructing the long standing demand of Ram temple in Ayodhya, can raise a lot of eyebrows, let alone, even ear flaps of the passerby.

Not to miss out on that, a huge gathering was observed at Malini Beel on the outskirts of Silchar on Monday evening where a ‘Jansabha’ was organized by VHP to initiate mass movement for the construction of the same. Leading the bandwagon was their Rastriya Sangathan Mantri, Vinayak Rao Deshpande, who in his hour long address to the VHP activists and Bajrang Dal members, didn’t mince words to say that the time has come for a bill to be passed in parliament for getting the ball rolling to build a magnanimous Ram mandir in Ayodha.

In the accompaniment of ‘sadhus’ and ‘sants’ on the dais, and heard from the audience’s enclosure by former Union minister Kabindra Purkayastha, VHP’s sangathan mantri, Vinayak Rao Deshpande, laid threadbare the state in which lies their position with the construction of this temple.

“Dipak Mishra before his retirement on October 2 informed us that Ranjan Gogoi would take charge and a special bench would sit on October 29 to deal with the case of Ram Janam Bhoomi. CJI Mishra also remarked that such benches would sit almost daily to settle this issue once and for all,” Vinayak Rao Deshpande reiterated.

He went on, “The case indeed came up on October 29, when the newly appointed CJI, Ranjan Gogoi, was at the helm of affairs. On that day when additional solicitor general, Tushar Mehta, opened up the conversation with reference to Ram Janam Bhoomi, CJI Ranjan Gogoi immediately cut through, saying, a three bench of judges would be constituted for this issue in the month of January or March next year. Our advocate pleaded that it has been 68 years that the case has been going on and why can’t the matter be taken up on a top priority earlier, to which, what CJI Ranjan Gogoi said has pained us a lot and is an insult for all the Hindu community.”

“CJI Ranjan Gogoi in his remark said, we have a lot of other things to do, so please get on with the next case. What a statement. The Supreme Court opens up at 2 am to decide whether Yakub Memon should be hanged or not. It opened up for many other occasions at night, but, for a religious sentiment that has been going on for ages, the Supreme Court says that this case is not of tantamount importance,” informed Vinayak Rao Deshpande venting his anger.

Later talking to Northeast Now on this issue, Deshpande said, “We respect the apex court and its broad framework, but, it should also respect back the will of the people and their sentiments. VHP as well as all the sandhus and sants have decided now to create a mass movement to get a bill passed in the parliament to start the work for this mandir’s construction.”

“A countrywide jansabhas would be carried out next month for all of these and if things don’t pan out, these religious leaders of various sects would meet once again at Prayag on January 31 and February 1, next, to decide upon the ‘final’ course of action,”  Deshpande said.