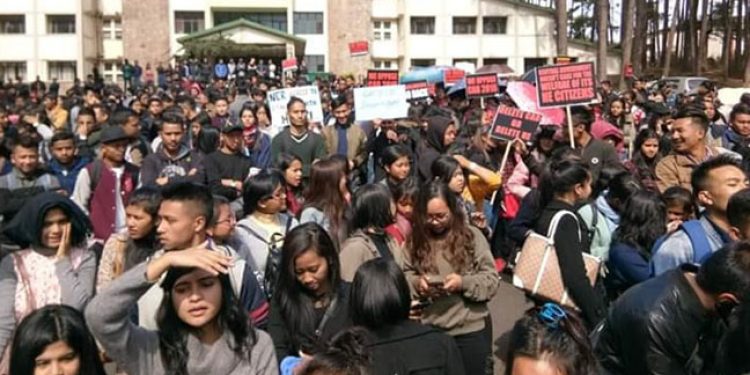 The Khasi Students’ Union (KSU) on Wednesday evening took out a ‘victory rally’ in Shillong after the attempt of the BJP-led NDA government to pass the Citizenship (Amendment) Bill, 2016 in Rajya Sabha was stopped.

However, the Hynñiewtrep Youth Council (HYC) termed it a “semi-final victory.”

KSU activists took out a car and bike rally in Shillong city to celebrate the failure of the BJP to table the Bill in Rajya Sabha on Wednesday.

The activists also shouted slogans against the BJP and Prime Minister Narendra Modi and in the evening they burnt the effigies of Modi, Union Home Minister, Rajnath Singh at Nongpoh in Ri-Bhoi district and Nongstoiñ in West Khasi Hills district.

The HYC, however, said NGOs under the banner of the Confederation of Hynñiewtrep Social Organizations (CoHSO) would not celebrate now because “we still have a final match to be fought that is the fight for implementation of Inner Line Permit (ILP).”

HYC president and chairman of CoHSO, Robertjune Kharjahrin said that the Confederation was happy as the Bill was not tabled in Rajya Sabha and thanked the people of Hynñiewtrep and the whole North East for standing against the Bill.

“The win over the CAB and the BJP is only a small victory. The biggest war is the war that we have to fight to preserve the identity of our indigenous Hynñiewtrep people. As indigenous community, we have to wake up to protect ourselves by having a strong law like the ILP, NRC and other laws. Time will come that any big party, be it the BJP or other parties that come to power may again try to crush us. Therefore, we remind the government that it should implement ILP, NRC and other strong laws immediately in the state,” the CoHSO chairman said.

In the campus of the central university – North Eastern Hill University (NEHU) at Mawlai, students and teachers of the university staged a protest against the Citizenship (Amendment) Bill, 2016 on Wednesday under the theme “Save North East today, to save India tomorrow.”

As the Bill was not tabled in Rajya Sabha, the JAC also called off its sit-in protest proposed to be held on Thursday.