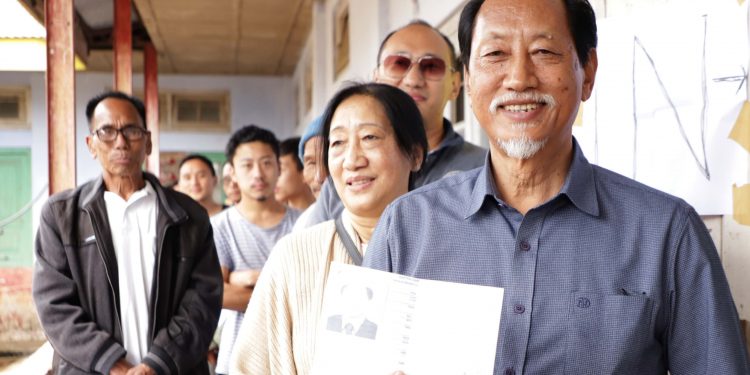 Nagaland Chief Minister Neiphiu Rio waits in a queue to cast votes during the first phase of the Lok Sabha polls at Tuophema in Nagaland Credit: UB Photos

Prominent figures across Northeast were seen exercising their franchise on day 1 of this year’s general election.

“Voted for Good Governance and Development,” the CM tweeted after exercising his franchise.

Chief minister of Nagaland, Neiphiu Rio, also came out to cast his vote from Tuophema, Kohima. Satisfied after exercising his voting rights, Rio urged everyone to participate in the electoral process. The chief minister was accompanied by his wife Kaisa Rio and son who also exercised their franchise.

Also, making an appearance on phase 1 of the Lok Sabha elections in Meghalaya was Congress MP and candidate for Tura constituency, Mukul Sangma who cast his vote at Ampati in South West Garo hills.

Tripura chief minister Biplab Kumar Deb also came down to cast his vote amongst much fanfare in the state. The CM maintained that he is confident that the people of Tripura are fully aware on whose hands the future of the country is secured and which party can ensure development of the nation.