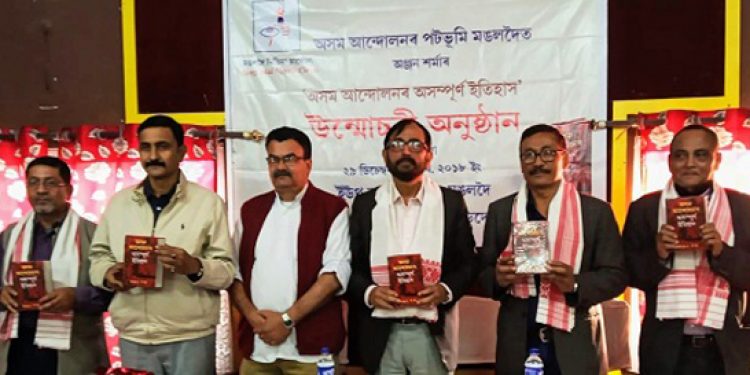 Bringing a new ray of hope for the scientific preservation of the records of the historical Assam Movement for the younger generation, an Assamese book of around one thousand pages titled ‘Asom Andolanar Asompurna Itihas’ was released at a function in Mangaldai of Assam’s Darrang district on Saturday.

The book has been authored by Guwahati-based writer and progressive thinker Anjan Sharma.

Addressing the august gathering of around one hundred book lovers including senior leading citizens, women activists, youth leaders and members of different local public organizations, author Sharma first explained why he had chosen Mangaldai for release of the book being the place for laying the foundation of the historical movement some forty years back.

“I believe, Mangaldai is the place where Assam Movement had started following a mass protest over the issue of inclusion of fifty thousand illegal foreigners into the voters’ list before the by-election following the death of then Mangaldai MP Hiralal Patowary in 1979,” said Sharma.

He also recalled several other vital issues of the Assam Movement related to Mangaldai which dragged him to the town to release his book.

Commenting on his thoughts behind composing of the book, writer Sharma said, “Forty years have passed since the movement had taken place and youths of the State are still in the dark of the historical phenomenon. Publication of this book is to offer a little knowledge to these youths about this movement so that they can carry forward its ideology in a proper direction.”

He hoped that his book would help the young writers to compile a complete history of the six years long movement.

“I have tried to include most of the important incidents of the movement and I know many more still have been left. My book is simply like the ‘Nritya Natika’ of a drama and the drama will be composed by our young writers and keeping this in mind the book has been published using the new information technology-based publication technique called Unicode,” he added.

Speaking on the occasion, Satyendra Prasad Sharma underlined the significance of publication and study of such historical book which would bring to light many untold stories of the historical development which had great relevance for the Assamese language, culture and heritage.

He lamented on the poor consequences of the movement for electing some incompetent “rowdy” leaders to power and at the same time stressed the need of following the examples of Manipur and Meghalya where in case of an issue of the State all the political leaders cutting across their differences of political ideology always remain united.

Bedabrata Mishra, Dilip Patgiri, Lachit Bordoloi and Tilak Prasad Baruah also spoke on the occasion and highlighted the hard work of author Sharma, a student from engineering background behind bringing it out an important book of historical significance.