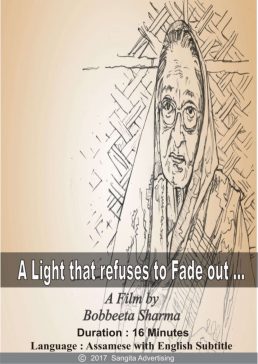 A documentary film A Light That Refuses to Fade Out based on the life of noted social activist Aruna Mukherjee, received the Jury’s Special Mention Award in the Heritage Short Film Competition at the Chalachitram Guwahati Film Festival, 2018.

The film festival was held at the Jyoti Chitraban Film Studio premises in Guwahati from March 2-4.

The film which is directed by television personality Bobeeta Sharma was shot over a period of two years also coincided with Mukherjee’s 100th birthday celebration. The film is produced by Sangita Advertising.

The award was given away to the team of the documentary film by Naba Kumar Doley, State Minister of Cultural Affairs.

The Bobeeta Sharma directorial venture is made on the life of 101 year old social activist Aruna Mukherjee, who has been living a long and spirited life sustaining herself only on black tea and thin arrowroot biscuits since 1947.

A resident of Rehabari area of Guwahati, Mukherjee was deeply moved by the plight of poor people and took drastic measures to bring about major changes in their conditions.

Chalachitam is a Guwahati based organization that is spearheaded by film critic Utpal Dutta and Amarjyoti Deka who is the organizing secretary.

Chalachitam works for the development and upliftment of the Assamese Film Industry and strives to take the locally made movies to international audiences.