BJP trying to repeat 1992 at Ayodhya: Sitaram Yechuri in Tripura

December 6, the day of Babri Masjid demolition will be observed as ‘Save the Constitution, save secularism day’ to awaken people of country against divisive plan of BJP-RSS 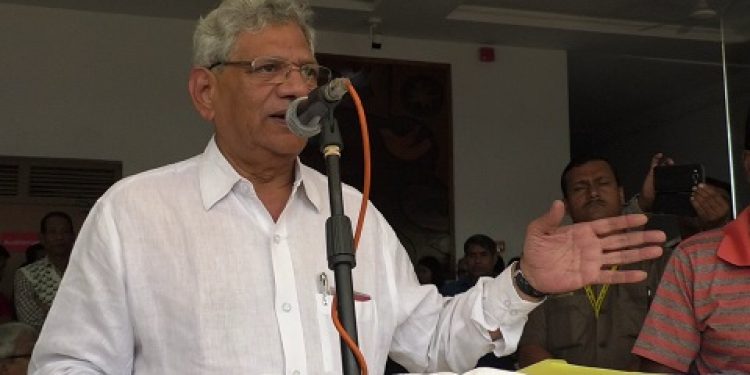 The Bharatiya Janata Party (BJP) is trying to repeat the Babri mosque demolition incident of 1992 at Ayodhya again with help of the RSS and Shiv Sena in order to communal polarization of the Hindu vote bank and targeting the vital 2019 general election, said CPI-M leader Sitaram Yechury on Sunday.

Yechury, the CPI-M general secretary said, “A very dangerous situation is developing in Ayodha today. The VHP sponsored Dharma Parishad is to be held there, the BJP-RSS have clearly said that they are mobilizing two lakh people which are more than the people there in 1992 when the Babri Masjid was demolished.

The Shiv Sena’s Uddhab Thakre has also joined them. Though they are appearing to be critical but the actual purpose is to generate the entire population over the disputed land and Ram temple there.

The BJP officially says that it will abide by the court verdict but what it has done in 1992 and what it is doing today is to subvert the Indian Constitution and the judicial process, he said.

He added that the Left Front is trying to expose the divisive politics of the BJP so that the secular identity of the Indian Constitution can be saved.

“Now the Constitution of India and the current law cannot be subverted in the name of faith. Now we are asking the government adequate precautions must be taken to ensure the scenario does not develop like 1992 when the darkest blotch in modern India’s democracy was the destruction of demolition of the Babri Masjid,” said the CPIM leader.

He informed that CPI-M along with likeminded pro-secular parties has called for observing December 6, the day of Babri Masjid demolition, as ‘Save the Constitution, save secularism day’ to awaken the people of the country against the divisive plan of the BJP-RSS.