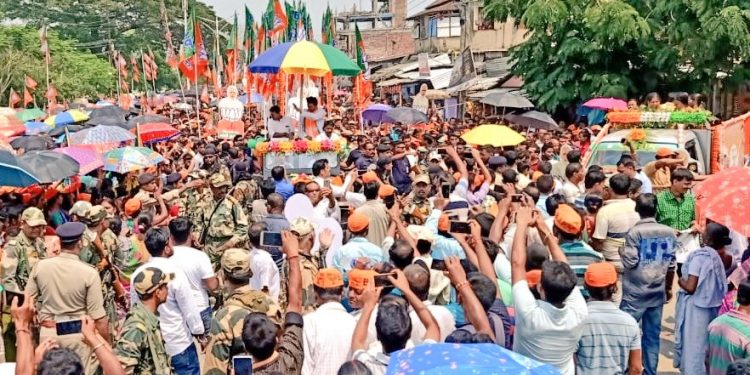 On the last day of campaigning for the third phase of Lok Sabha polls, Tripura chief minister Biplab Kumar Deb on Sunday campaigned for BJP’s Tripura East LS candidate Rebati Mohan Tripura and participated in roadshows at  Khowai and Teliamura under Khowai district.

During his election campaign for the party candidate, Tripura BJP chief Deb, who was the star campaigner of the BJP in the state, targeted the Congress and the CPI-M holding both the parties responsible for the present backwardness of the tribal section people in Tripura.

Durinbg the roadshow, Tripura chief minister Deb alleged, “The CPI-M has conspired to divide the tribal and non-tribal people by starting a communal fight in the state in which Congress has also had helped them.”

Deeply grateful to the people of #Khowai for their incredible response to the @BJP4India Roadshow held here today.

I bow to my brothers and sisters here for their support and affection.

Deb said the worst sufferers of the “conspiracy of the CPI-M and Congress” are the tribal people and so they should take the revenge by voting against them on the coming voting date rescheduled for April 23.
According to Deb, insurgency in the state is also a conspiracy made by the opposition parties and in this case also, the tribals were at the receiving end.
Deb with hundred of BJP supporters went through various streets of Khowai and Teliamura raising slogans for retaining Modi government at the Centre for the second time.

I bow to the people of Teliamura for showing their incredible support during the @BJP4India Roadshow held here today. #IndiaBoleNaMoPhirSe pic.twitter.com/lxFQBvNHzu