Warmth of humanity in wintry morning on Jorhat footpath

Babu Bora, a differently abled beggar here was wrapped in the warmth of humanity on this wintry Monday morning.

The warmth exuded in the form of a blanket wrapped around him by Ratul Baruah, a social worker, who spotted him one day seeking some sunlight on the footpath of the busy AT Road where he begs everyday.

For Bora the blanket was like a boon from heaven with temperatures dipping tremendously in the past couple of days.

“I am thankful to this gentleman for giving me this blanket. The one I have at home has worn out. The sweater I am wearing is also too light to keep the cold at bay,” Bora said.

Bora whose left hand is crippled said he comes out everyday from Nathgaon in the Bahona area of Jorhat by tempo and begs near the Tarajan Masjid at AT Road. Kind hearted tempo drivers ferried him for free or sometimes he pays half the fare.

“I live with two sisters and one of them is crippled like me. She also begs. My father was a havildar in Assam police but he passed away long back and I do not remember him,” he said.
Regarding pension, Bora said that when his mother was alive they used to get something but “this was several years ago.”

For Ratul Baruah who had already doled out 35 blankets to the needy last month, this blanket was an extra when he chanced upon Bora a few days ago.

In previous years Baruah had donated blankets to destitute home at Lichubari, to the poor among the tea community and to villagers of Elengmora.

Baruah, a Gandhian, is himself a differently abled person after he was hit by a motorcycle a couple of years ago and broke his leg. 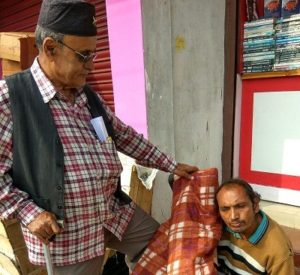 Baruah, also considers himself to be a mendicant. Although, he founded and heads the Mahapurusha Madhabdeva Foundation, the non government organisation established in 2014 and registered last year has no funds.

“I have friends who are happy to give the organisation money whenever I ask them. The rest I give from my own pocket, “he said.

Baruah has a vision of setting up a self sustaining ashram for destitute women and children.

“The shelter would be for widows or women left by husbands to fend for themselves or even old spinsters who could be empowered by learning weaving or other craft,” he said.
Another dream is to set up a farm of medicinal herbs and trees.

In this regard he has asked the government to evict 80 bighas of encroached land on which the dilapidated Amity Ashram or Mitur Ashram stands at Nagabat in Titabar subdivision of the district bordering Nagaland and has done another RTI to find out how much of the Hatigarh has been encroached and whether this land can be used for the purpose.

The historic Hatigarh, two high embankments with a passage in between, was put into place on the eastern outskirts of Jorhat town to drive down elephants from the Naga hills at one end to Hati Saal where they were caught and tied to poles of the sal trees at the other end by an Ahom king.

On January 31, the Foundation will observe Gandhis death anniversary with a contest among schoolchildren delivering speeches on Gandhi’s life and teachings.

“I do not know how much I can achieve but I would like to lay the base of an organisation which will carry forward Gandhi’s tenets of service to the poor and Mahapurusha Madhabdeva’s humility and principles of equality forward, “the septuagenarians said.